"My life just kind of did a 360. Not everybody gets those types of chances. I took advantage of the opportunity that came my way." 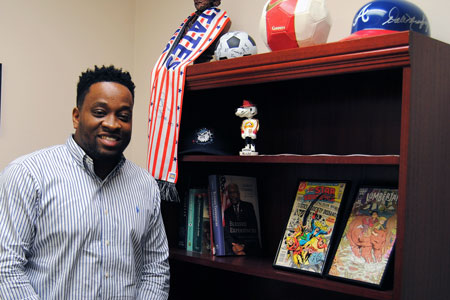 "I wanted to do something different with my life and I told myself I'm going to dedicate the rest of my life to helping young kids any way I can." — Ivan Carter, senior, HRSM

That’s how Ivan Carter describes his journey from high school dropout to husband and father on the verge of earning a bachelor of arts in interdisciplinary studies (B.A.I.S.) degree from the University of South Carolina College of Hospitality, Retail and Sport Management.

For Carter, the turning point came after a tragedy. His brother was murdered when Carter was a high school senior. Carter dropped out of school, and was, as he described it, “headed down the wrong road." But reflecting on the way his brother’s life was cut short changed everything.

"I said 'You know what? I can't live like this,’ ” Carter says. Many people make such resolutions, but with some help, Carter succeeded. Through church connections, he met South Carolina Sen. Darrell Jackson who took Carter under his wing.

Jackson helped him get involved as a volunteer with several local nonprofits. The experience that eventually led to meeting Columbia Mayor Steve Benjamin, who chose Carter as a Mayor’s Fellow, a prestigious local internship. Through the volunteer work, Carter found the calling that still drives him.

"I wanted to do something different with my life and I told myself I'm going to dedicate the rest of my life to helping young kids any way I can,” he says.

The desire to help led him to Midlands Tech, where he earned an associate’s degree in paralegal studies, with an eye on law school. He continued volunteering with, among others, the Columbia Urban League, and found himself leaning more toward social work. He applied to Carolina where he discovered HRSM’s B.A.I.S. degree, partly from Tena Crews, associate provost for academic programs.

"She is one of the most wonderful people I've ever met, her whole spirit,” Carter says of Crews. "She understood what I was doing and why I was working." He chose the B.A.I.S. program, then led by Crews, and soon was a Gamecock.

"USC inspired me to be great," Carter says, though there were adjustments to be made.

"When I first started taking my classes, I was really nervous,” he says, smiling at the memory. "I wasn't used to being around, people who were so different from me. But that whole diversity just broadened my mind and I was like 'You know what? I can do it too.' "

As the first in his family to graduate from high school, the first to earn a college degree and the first to attend the university, he is breaking new ground. But he admitted that being the first can be extremely hard at times. It takes courage to rise above what your friends and family might say or think and decide to do better. The key for Carter was remaining focused on building a better life for himself, his wife (a doctoral candidate at Carolina) and their children.

Carter is in his final semester as an undergraduate and is considering returning for graduate school. At 33, he has found himself a leader among his fellow students, many of whom are more than a decade younger.

"I find myself encouraging a lot of young folks," he says, a focus he also holds in his job with the Midlands Fatherhood Coalition. There, he helps young fathers reconnect with their families. Despite all the obstacles he has had to overcome to approach graduation, Carter says he would not change a moment.

"It's been a good ride," he says. He also offered one simple piece of advice for those who may be on the wrong road, as he once was. Just four words: "Go back to school."