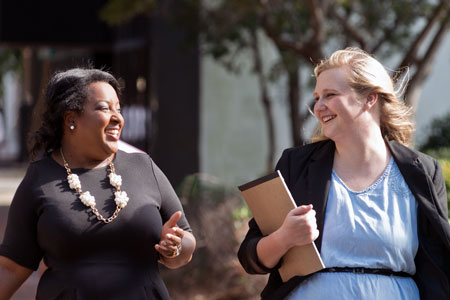 There’s no question that having a good mentor can help shape an individual’s career — especially in the field of law. That’s why the University of South Carolina School of Law has devoted substantial resources to take its mentoring program to a new level.

The program ensures that every student has a chance to be paired with an experienced attorney who can help them navigate their way through law school and into the professional world. And since its inception in 2010, it has changed the lives of both mentors and mentees.

Lexi Harris, a first-year student at the School of Law, is pretty sure she would have thrown in the towel midway through her first semester had it not been for her mentor.

“I knew the first year of law school would be hard, but I was blindsided by how tough it actually was,” Harris said. “I had been a top-ranked student throughout my academic career, but so had the rest of my classmates. Suddenly, one of us had to end up at the bottom, and that was not a concept I was prepared for.”

Harris considers herself fortunate to have been assigned 2011 alumna Sheila Bias as her mentor during Introduction to the Legal Profession, a required class for all 1Ls.

“During those times that I wanted to quit, she made sure that I understood that every other student was under the same pressure and that we all had the same doubts,” she said. “That convinced me to stick with it, and eventually I realized that even though it felt like I had no idea what I was doing, I actually did.”

Bias began volunteering with the School of Law’s mentoring program because of her personal experience with mentors, both as a student and as a lawyer.

“I didn’t have any lawyers in my family or circle of friends when I began law school, so I relied on unofficial mentors to help navigate professors, exams, job searches, networking and professionalism,” she said.

Now an attorney with Fisher and Phillips LLP, Bias continues to seek out her mentors’ advice, as she did whenshe transitioned to employment law after working as a staff attorney for the Supreme Court of South Carolina.

“Among other things, one of my mentors offered suggestions on researching firms and negotiating incentives, and she encouraged me to consider options that I never would have otherwise,” Bias said. “I credit her for much of where I am in my career and for the person and attorney I have become.

“I want my mentees to feel like they have found a similar support system, sound advice and, hopefully, a friend. I’m excited that I will be able to call them peers one day.”

From the start, Harris said Bias treated her as if they were already peers. And that’s not an accident.

“Here at Carolina Law, we believe strongly that the first day of class is the first day of a student’s legal career,” said Sharon Williams, who administers the mentoring program through the School of Law’s Nelson Mullins Riley & Scarborough Center on Professionalism. “Our goal is to provide strong connections to lawyers, judges and other legal professionals from day one.”

To that end, the School of Law curriculum requires the Introduction to the Legal Profession course, as well as optional yearlong one-on-one mentoring for 3Ls in partnership with the Young Lawyers Division of the South Carolina Bar. In her search for quality mentors, Williams seeks both new and experienced lawyers who are able to act as coaches, motivators, teachers, counselors or confidants — whatever an individual student needs.

“It’s important for students and new lawyers to be able to lean on someone who has been in a similar situation,” Bias said, “and I enjoy providing guidance and advice to students on issues with which I have previous experience.”

And Harris is a happy recipient. “She met me one-on-one for lunch, and our group met at places outside of school where we could just engage in small talk. There was much more laughter and chatting than I would have thought possible,” she said. “She was so open and friendly that I felt comfortable from the beginning, and I know we’ll stay in touch in the future.”

Approximately 110 lawyers and judges are needed each year to volunteer as mentors to law students. To become one, contact Sharon Williams at 803-777-7785 or scwillia@mailbox.sc.edu.