When high school math teacher Morgan Bailey steps in front of her class in rural Walterboro, South Carolina, she worries that some of the faces looking back at her may not graduate. Even more, she fears that a few may end up in prison or worse.

“I see the school-to-prison pipeline unfolding in front of my eyes,” says Bailey, in her second year at Colleton County High School. “There is always that student who is intelligent but is a discipline problem, who resists authority and is facing expulsion. I always try to stay aware that something happened to make him, or her, hate school despite their intelligence and ability to do well.”

Finding out what that “something” is always has interested Bailey. A native of Walterboro, Bailey graduated from Carolina in 2015 with a business degree, but found her calling as an educator.

“I always have wondered why some people make it out of my hometown, go to college, find success and why some do not and are stuck in a cycle of poverty. I know equity of education is a key factor,” she says. 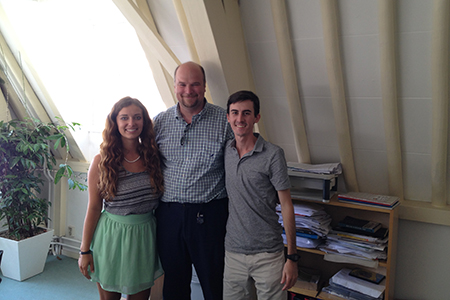 During her sophomore year, she wanted to research the challenges facing school children in rural communities. The Office of Undergraduate Research connected her with education professor Doyle Stevick, whose extensive work with the Anne Frank House has brought powerful educational experiences to children in lesser served communities.

Stevick encouraged Bailey to volunteer with an educational traveling exhibit that focuses on the life and times of Anne Frank. The College of Education and its Teaching Fellows Program train middle and high school students to discuss the issues raised by the exhibit with their peers. Bailey brought the exhibit to Walterboro and was shocked to see a packed house opening night.

“So many people in my town never leave the United States, and this exhibit gave them (and me) a look at life in another part of the world,” Bailey says. “The racism and prejudice that Anne Frank faced unfortunately still exists. But by learning about her life, students who are separated by generations and thousands of miles can relate to each other and learn something about social equality and justice.”

Bailey’s work with the traveling exhibit led to an opportunity for her to intern at the Anne Frank House in Amsterdam.

“One of my main tasks was to plan and implement an international youth conference, which brought together young people from across the world to discuss current social injustices and develop plans to confront issues in peaceful and effective ways,” Bailey says.

During that youth conference, Bailey met Anne Frank’s stepsister, Eva Schloss, a Holocaust survivor who wrote the memoir, “Eva’s Story: A Survivor’s Tale by the Stepsister of Anne Frank.” 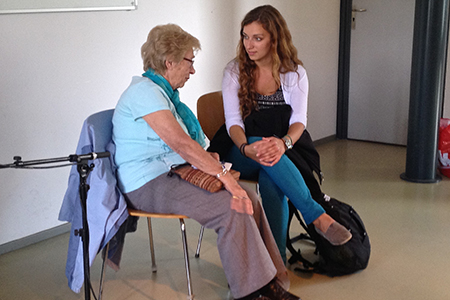 “Despite her experiences, Schloss didn’t point blame or hold ill will towards those who imprisoned her,” Bailey says. “She said that to be overcome with hate would make her as bad as Hitler, and that she wasn’t going to allow that to happen. I always will remember those words. I want to be like her in that way.”

Instead, Schloss dedicated most of her life to educating people about the Holocaust and fighting racism and social inequalities. On Feb. 27, Schloss will be in Columbia to share her childhood and wartime experiences to middle and high school students at the Koger Center as part of the University of South Carolina’s President’s Leadership Dialogue. The dialogue is part of the university’s Carolina Leadership Initiative, which fosters leadership development among students and makes leaders from various fields and backgrounds available to students and the community.

Sitting in the audience will be Bailey and some of her students.

“My life was changed by volunteering with the Anne Frank traveling exhibition,” Bailey says. “This opportunity, and Dr. Stevick, opened doors for me by allowing me to travel and meet people from around the world. I have an incredible passion for education equity. My goal is to ensure that every student I meet, no matter their race or socio-economic status, are given the best chance to learn, grow and succeed.”