Samuel Tenenbaum always has been passionate about learning and community. It was nearly 30 years ago that the retired steel executive and philanthropist met Carl Evans, professor emeritus of religious studies at the University of South Carolina.

Their shared interest in ecumenical work led to Tenenbaum’s support of starting a Judaic studies program at Carolina in 1990. A few years later, Tenenbaum and his wife, Inez, along with Charleston business man Melvin Solomon, and his wife, Judith, established the Solomon-Tenenbaum Lectureship in Jewish Studies, which brings a steady stream of high-profile figures to campus. 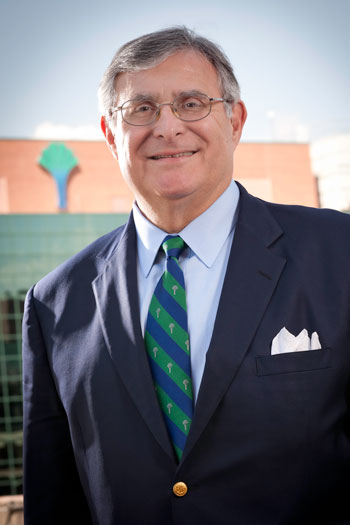 Philanthropist Samuel Tenenbaum believes the Solomon-Tenenbaum Lecture he helped establish 27 years ago is more relevant than ever as a catalyst for public dialogue and understanding.

On Tuesday (Feb. 7), Jon D. Levenson of Harvard Divinity School will deliver this year’s Solomon-Tenenbaum Lecture at 7:30 p.m. in Capstone House. The topic is the shared Abrahamic traditions of Jewish, Christian and Muslim faiths. Levenson will explore Abraham as the first prophet of the three faiths and the differences in the telling of Abraham’s sacrifice of his son – Isaac in Jewish and Christian teachings and Ishmael in the Muslim Quran.

We caught up with Tenenbaum who reflected on the lectureship and lifelong learning.

Q: Your support of the Solomon-Tenenbaum lectureship has spanned decades. What has it meant to you?

“It’s been 27 years for the lectureship, but Carl Evans and I laid the groundwork for it before that. It grew from our involvement in the ecumenical community. I’ve always believed that you have to put back into the community. Universities are important and provide a way to do that and to have an impact. I’m proud of this esteemed lectureship. The professional and academic achievement of the speakers has been profound. It is a great pleasure to have sat alongside others to hear Nobel Peace Prize winner Elie Wiesel, Pulitzer Prize winner Thomas Friedman, renowned historian Bernard Lewis and others.”

Q: There have been many notable Solomon-Tenenbaum lecturers. Do you have a favorite?

“Each one is a favorite in some respect. I’m a reader, and I make it a point to read their books before they come. I think back to Martin Cohen, who shared the journey of Sephardic Jews and how they impacted society and how society impacted them. There was Bernard Lewis, Deborah Lipstadt and Yossi Klein Halevi. There was former priest James Carroll, whose exploration of anti-Semitism was powerful, and then there was Elie Wiesel, who was, well incredible. Here’s a man, one of the most vulnerable human beings, who didn’t come out of the Holocaust hating but instead shared a loving message of improving the world.”

Q: This year’s talk is about the shared, although different, Abrahamic traditions found in Jewish, Christian and Muslim faiths. In this current world of unrest, what is gained by understanding interfaith connections and commonalities?

“I think it is well-timed given the furor coming out of people this year. These three faiths see Abraham in a different light. It challenges us to read, think and make our own decisions. In the Quran, it is not Isaac who might be sacrificed by Abraham but Ishmael. How did that happen? My God, we have so much in common. We need to look at where we agree and work to build on that. If we do, we can change the world. We must engage, listen and work together. Most people are willing do that if reached out to. Education and openness are everything. My life will be over the day that I can’t read and try to understand others.”

Q: You’re well known as a philanthropist and reader. Care to share your thoughts on recent projects or books?

“I just finished ‘The Sunflower: On the Possibilities and Limits of Forgiveness,’ by Holocaust survivor Simon Wiesenthal. It’s his account of being in a concentration camp and brought to the side of a dying Nazi soldier who asks for his forgiveness. What would you do? That’s the question he poses to the scholars, writers, rabbis and political leaders. The second part of the book is a symposium of responses from 53 people from all faiths and backgrounds. I’ve ordered 10 books to share with some friends so we can discuss. Like Wiesenthal, we are tested every day on how to forgive and approach others. It makes you think … really think.

Forgiveness and understanding is why all of us must reinvest in our community. And by investing, I mean volunteering and doing acts of kindness. All of these little things add up. Part of my Jewish culture is defending the dignity of every human being. If you reach out, the world will reach back, and you’ll be a better person for it.”