Kendall Hansen was 8 years old when he first picked up a blowtorch.

Hansen, a senior in the South Carolina Honors College double majoring in political science and English, was born into a distinctive family business. His parents, Danny and Sherry, founded The Crafty Celts, a hand-crafted jewelry business based in Batesburg, S.C. The family’s work has been featured for the past four seasons on the popular History Channel show “Vikings.” 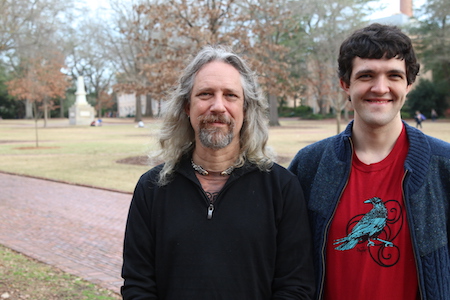 In the nascent days of the enterprise, the Hansens — Kendall is the oldest of four children — would travel to as many as 40 trade shows a year, peddling their wares. The myriad miles led to Kendall having been in more states than he was months old for much of his early childhood, and eventually to his being homeschooled.

“I had been involved helping run the booth since I was a little kid, even when I was first talking,” he says. “When I first started working in the shop, I believe I was about 8. I very specifically remember using a blowtorch.”

Though his grandfather, Harry Hansen, was an art professor at Carolina and his father, Danny, fell in love with his craft in a jewelry-making class at the university, Kendall has never taken any art classes. His academic schedule in the College of Arts and Sciences is rigorous, featuring a double minor in history and Spanish and a plethora of electives, but when it comes to jewelry-making, he is largely self-taught — with guidance from his parents, of course.

I really enjoy it. I’m having a lot of fun doing this, and I’m getting better at it as the years go by.

Kendall was recently asked by the costume department of “Vikings” to design a reproduction of a ring worn by King Æthelwulf, the father of Alfred the Great. The scene Kendall’s ring was to feature in ended up being written out of the show, but he hopes the actor it was intended for may still wear it.

“It took me about two weeks to carve the original,” Kendall says. “Normally it would take me much longer to make a new design, but I worked every day for two weeks. I hadn’t done anything nearly this complex before.” 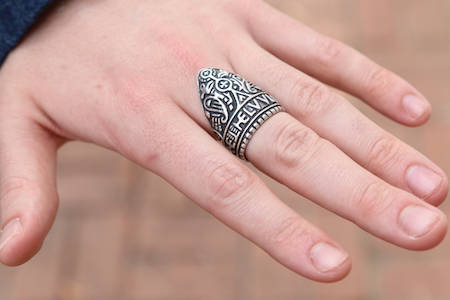 The show’s producers approached Danny Hansen, engineering ’90, to share some of his designs before its 2013 premiere. The professional partnership between the Hansens and “Vikings” soared to another level after the second season, when a bracelet designed by Danny played a major role in a plot line.

Design inspiration comes from both historical research and original ideas. Kendall has traveled to museums in Dublin, Belfast and London to view pieces, and he also has plenty of material closer to home.

“My father’s got a large library of books on Celtic, Viking and Saxon jewelry that we periodically refer to,” he says. “My childhood was spent digging through those books. I used to love looking at all the different designs.”

So far, Kendall is the only one of his siblings (two brothers are 18 and a sister is 11) to combine a keen interest with an obvious aptitude for the family business.

“He’s watched us make jewelry his whole life,” Danny says. “He just kind of picked it up as he got older.”

Kendall is also pursuing academic writing, but the family business will likely be a big part of his future.

“I really enjoy it,” he says. “I’m having a lot of fun doing this, and I’m getting better at it as the years go by.”