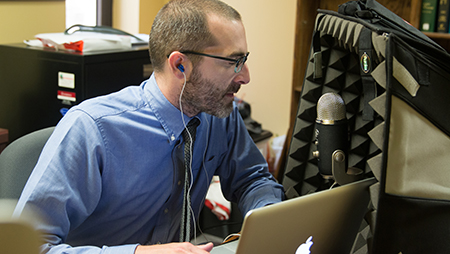 This is an excerpt from Colin Miller's "Undisclosed" podcast. You can hear Episode 1 in its entirety online.

Colin Miller is on a mission.

Miller, a law professor, is a host of the popular podcast “Undisclosed,” which delves into what its producers believe to be wrongful convictions. The podcast spawned from the well-known case of Adnan Syed, the subject of Sarah Koenig’s successful “Serial” series.

“Serial” documents the case of Syed, granted a new trial this past fall after being convicted of the murder of his ex-girlfriend in 2000. Miller and fellow lawyers and podcast contributors Susan Simpson and Rabia Chaudry had blogged about the case extensively, but wanted to reach a wider audience.

“Rabia was giving talks around the country about some of what we’d been reporting on our blogs, and while most of the audience had listened to ‘Serial,’ not as many had read the blogs,” Miller says. “So the idea was, let’s go ahead and turn that into a podcast to reach a wider audience.

“It’s a good opportunity for people to hear about these cases and shine a light on injustice.”

“Undisclosed” has also examined the cases of Joey Watkins, a Georgia man convicted of murder in 2001, and Jamar Huggins, an Horry County, S.C., man found guilty of burglary, kidnapping and armed robbery in 2014. A new episode scrutinizing the death of Baltimore man Freddie Gray has recently joined the rotation.

The goal is to educate the public and hopefully to get justice for some of these people who have been wrongfully convicted.

In all the podcast cases, there are questions surrounding those convictions, from allegations of withheld evidence to judicial misconduct. Miller often writes and narrates the episodes, which are sometimes an hour or more in length, and splices in bits of audio from the case files as well as scene-setting music.

“Undisclosed” has gotten slightly more than 163 million hits since it launched in April 2015.

“I always love it when I’m able to reach people about the law and educate them,” Miller says. “That was the goal with the blog, and the podcast was an interesting new medium to educate the public.

“It’s much more accessible than having to go and read through a 1,000-word blog post. You can include audio clips from the case, have some music transitions, and make it more entertaining than just reading some dry prose.”

Cases come to the attention of “Undisclosed” in various ways. After the first season, the producers put out a call, and a response from the Georgia Innocence Project led them to the Watkins. That organization has filed a request for a new trial in January for Watkins, alleging the state withheld evidence and a juror acted inappropriately.

“We have many more requests than we can do,” Miller says. “It’s always just a question of reviewing whatever has been sent to us and maybe asking for additional documents. We want to ensure that a case we’re doing is truly a wrongful conviction, and something that the listeners would find interesting. It’s also helpful to us if there’s some good audio that we can use. Buy-in from the family, the defendant and the attorney is huge.”

Talking with family members about such intense subject matter can get emotional, Miller says. The best moment of his podcasting career so far, he says, came when Syed was granted a new trial.

“The goal is to educate the public and hopefully to get justice for some of these people who have been wrongfully convicted,” he says. “It takes some time getting there, but once you’ve done all the research and you’ve dug into it, you can see whether justice has been done or not.”