Kimberly Medina, a University of South Carolina senior from Myrtle Beach, South Carolina who has spent her college years working to improve the lives of Hispanics, was named the university’s Outstanding Woman of the Year 2017.

University officials honored Medina and four finalists during a ceremony Wednesday (March 29). The award is given annually to an undergraduate who demonstrates exemplary academic achievement, service and leadership and who has had a positive impact on the university and to other women. 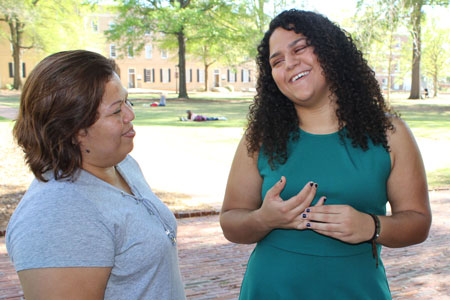 Senior Kimberly Medina (right) and her mother enjoy an afternoon on the Horseshoe after she was named Outstanding Woman of the Year. Medina was recognized for her leadership and service work to improve the lives of Hispanic women.

“I want to thank my parents. This is a testament to the sacrifices they have made along the way,” Medina said. “If any young woman identifies with me, I want her to know that your background doesn’t limit what you’re capable of.  On the contrary, it’s what fuels you to succeed in life — not only for yourself but for your community as well.”

Last fall, Medina served as a legal intern with Mil Mujeres Legal Services (translated as 1,000 women), a nonprofit based in Washington, D.C., that provides legal services and community education to low-income Hispanic immigrants. Medina, a political science and international studies major in the South Carolina Honors College, was in the nation’s capital as a South Carolina Washington Semester intern. With Mil Mujeres, she worked with women who suffered domestic violence at the hands of either a legal permanent resident or a spouse who was a U.S. citizen.

“I see the value of living beyond the shadows. Having legal status opens many doors,” Medina said. “With it comes the opportunity to drive and work legally and most importantly, the opportunity to live without the fear and threat of deportation. For many women gaining legal status is what propels them to leave abusive relationships, seek helps and more forward with their lives.

As a student at Carolina she has served as a leader with the Multicultural Assistance Peer Program, a campus program that helps first-year multicultural students with the transition to college life. She also is a member of Amigos del Buen Samritano, an organization where students serve as interpreters for Hispanic Immigrants at the Good Samaritan Clinic, a free health and dental clinic in Columbia. 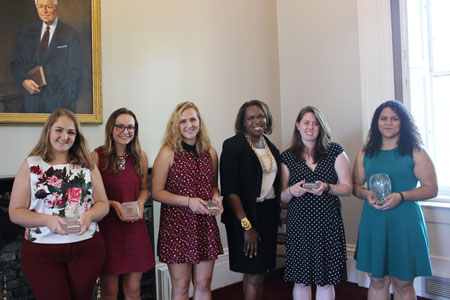 Kimberley Medina (right) joins the other finalists and the event speaker at the Outstanding Woman of the Year cermoney.

“The power of language is immeasurable. When you are an immigrant in a nation whose language you do not know, it is easy to feel like you have lost the ability to speak or to be understood,” says Medina, who is fluent in Spanish and Portuguese. “In my time as a volunteer at the Good Samaritan Clinic, I’d like to think that I have contributed to an environment where immigrant women feel like they are worthy of quality medical attention no matter their immigrant status or English-speaking ability.”

Medina is a member of Phi Alpha Delta law fraternity, Sigma Iota Rho honor society for international relations and Pi Sigma Alpha national political science honor society. With a GPA of 3.89, she has been named to the president’s list for five semesters and has earned the university’s Outstanding Achievement and Student Triumph Award and the Excellence in Undergraduate Studies Award.

Medina was selected as Outstanding Woman of the Year from a field of 30 candidates. The selection process includes the review of resumes and essays and interviews with the five finalists.

This year’s finalists included Cynthia Beavin, a senior from Louisville, Kentucky, who created her own major — sexual and reproductive health and rights in developing countries; Kelly Gross, a senior from Fort Worth, Texas, majoring in public health; Kaitlin McClamrock, a junior from Columbia, majoring in political science and European studies; and Clarie Randall, a senior from Greenville, majoring in biology and psychology.

The Outstanding Woman of the Year award is sponsored by Student Life.