Freshman gives TEDx talk about how he became a viral sensation

While some Gamecocks played on the national stage for basketball this weekend for the Final Four in Phoenix and Dallas, freshman political science major Michael Senatore stepped on a stage of a different sort. On Saturday (April 1), Senatore gave a TEDx talk at Carnegie Mellon University on how he made the science of flipping a water bottle a national phenomenon.

Flip back to May 2016. That’s when Senatore, who was then a senior at Ardrey Kell High School in Charlotte, North Carolina, slowly walked on stage to John Quinterro’s “300 violin orchestra,” stopped and flipped a partially filled water bottle onto a TV tray as the beat dropped. The crowd went wild and so did the Twitter followers who retweeted a video of the moment 20,000 times. Senatore became an overnight sensation. 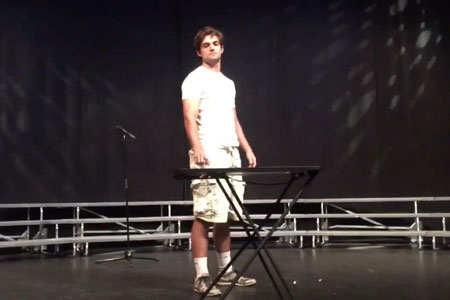 Freshman Michael Senatore never imagined that flipping a water bottle would lead to TV appearances and charitable contributions. On April 1, he gave a TEDx talk at Carnegie Mellon about his experience.

Over the next few months Senatore appeared on The Colbert Report and Harry Connick Jr. He also did advertisements for Red Bull, LG and Sheetz convenience store. He even met the co-founder of Coachella.

Senatore says the best moment for him was at his high school’s Relay for Life event, where he presented $10,000 to the American Cancer Society. The money was from Deer Park whose product was Senatore’s water flipping bottle of choice. The corporate donation was especially meaningful to Senatore whose father died from cancer a few years earlier. Deer Park also donated $5,000 to several Charlotte area schools in Senatore’s name.

After the media attention quieted and he started a normal routine as a student at Carolina, Senatore only thought about water bottles when he needed to fill one on campus between classes. That is until Shreya Nandi, a team member for TEDx at Carnegie Mellon University, reached out to him to encourage him to apply to be a speaker at its annual TEDx event.

“Shreya went to my high school and told me she immediately thought of me when they were brainstorming speakers for this year’s event,” Senatore said.

Not thinking he would be chosen, Senatore sent some talking points. Two months later, Nandi reached out to him on Facebook to say he got the spot.

“Our theme for TEDxCMU this year is Pivot, which is about what you do when your life suddenly changes either for better or for worse,” Nandi said. “People often think that normal people who go viral only try to use their fame for selfish reasons, which is far from true. Michael is a good example of someone who fell into fame, and then used that fame to do good.”

Senatore says giving a TED talk may be the coolest experience yet from his bottle flip.

“I’ve done so many things, and this feels like a nice culmination of everything that’s happened,” he said. “I’ll always remember my freshman year as my bottle flip year, and this will be a nice chance to talk about everything that has happened and wrap it all up.”

Senatore says his TED talk focused on his experience of becoming viral hit and how it has been different from other viral internet stars.

Ultimately, he encourages the next viral stars to not let an exciting moment change them but instead to stay grounded and try to use the fame for something positive.

Look for Senatore’s TEDx talk to be posted online.