Want to tune out that annoying co-worker while learning something new?

Excerpt from "Vocalise" by Sergei Rachmaninoff: 0:39 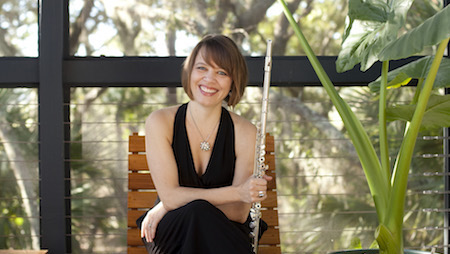 You could try visiting A Flutist’s Book of Days, the YouTube site where University of South Carolina flute professor Jennifer Parker-Harley is compiling 365 days of flute music.

Parker-Harley hit upon the multi-year project as a way to expose people to lesser-known composers while educating her students about music history. She and her students identify a suitable piece of music, record it and post it to the YouTube site, the Carolina Flute Guild student organization’s Facebook page and @carolinaflutes on Instagram. Parker-Harley performs some of the 15 pieces currently online, as do students, including Carolina Flute Guild president Emily Stumpf, alumni and collaborating artists.

“In the classical music world, we tend to stick to a few pieces that are played over and over and over again — the canon of flute music, or horn music, or piano,” Parker-Harley says. “And that’s good, because there are specific things everybody needs to know. But sometimes we do that to the exclusion of all the other repertoire that’s out there.

“I’ve always encouraged people to look for pieces that are a little bit off the beaten path. If you’re looking for 365 pieces of music by 365 different composers, that’s going to force you to expand your boundaries a little bit.”

The recordings relate to the days they are posted, usually corresponding to composers’ birthdays, and range in length from less than two minutes to almost 10. Parker-Harley hopes to post five recordings a month, reaching 60 by the end of the year.

“The ultimate idea is that when there are 365 pieces of music there, it’ll be a database for flute students who might be looking for music to play at their recital or music for a certain type of program,” Parker-Harley says. “They can file through and see if there’s something that appeals to them, and if it’s not a specific piece, maybe something else by that composer might interest them.”

“I’ve always encouraged people to look for pieces that are a little bit off the beaten path.”

Parker-Harley performed one piece, “Shiny Kiss” by California-based composer Alex Shapiro, that a mutual friend shared with Shapiro, to the composer’s delight, on her birthday. That piece, posted Jan. 11, has drawn the most interest, garnering 115 views.

“It was like a birthday present to her to find this unexpectedly,”  Parker-Harley says. “That was a fun connection to make.”

Stumpf performs a more standard selection, choosing a piece by Johann Sebastian Bach. While that name is obviously a recognizable one, Stumpf says the project has introduced her to other composers whose work she did not know.

“The chance to hear these works has been really cool,” she says.

Like Parker-Harley, Stumpf took up the flute at an early age, enjoying how the instrument mimicked the whistling she did constantly as a child.

“It felt so natural to me,” she says. “There’s a joyful element, just this kind of cheerfulness about it, but then you can sing with it and have deep emotions and sadness, too.”

Parker-Harley, whose parents are both musicians, hopes the flute music project draws in a new audience for the instrument.

“It’s an easy way to learn something about the flute with a small investment of time,” she says.