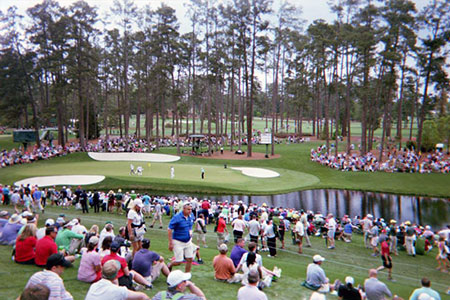 Augusta National Golf Club hosts the Masters Tournament. It is one of the most prestigious golf tournaments on the PGA Tour.

Working the 2017 Masters Tournament at Augusta National Golf Club was an experience unlike any other. Waking up at 4:30 each morning and spending nearly 15 hours on your feet for seven days straight may sound agonizing, but that’s only because it is. The payoff, however, is indescribable.

As a server at Berckmans Place, a relatively new addition to Augusta National, I learned more about myself and others than I ever thought I could. I met patrons from around the world— Dubai, Australia, Scotland, Vancouver and beyond— and somehow made a connection with each and every one of them. It is encouraging to know that we are not as divided as many believe.

I also became friends with fellow student employees that I would have never met otherwise. These new friends understood the exhaustion felt during each workday, but they also understood the elation that came with working at the most prestigious golf event in the world. We genuinely enjoyed enhancing the Masters experience of the patrons we served, making all of the pain in our feet eventually fade away. 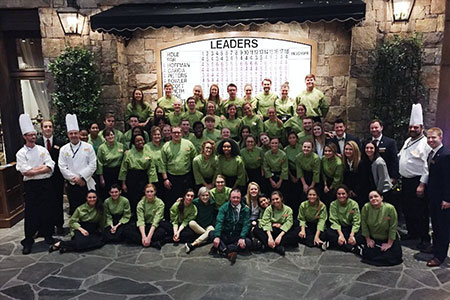 LaFerlita worked with other students and staff at Berckmans Place.

I gained valuable life lessons, like patience and perseverance, as well as how to balance eight tall glasses on one tray. I was fortunate enough to walk around the grounds of Augusta National, an opportunity that many will never have in their lifetime. The course is almost like a storybook — the greenest grass and most perfectly manicured landscape I’ve ever seen. I stood several feet away from some of the top names in golf, congratulating them on their success in the tournament while desperately hoping to make eye contact with Jordan Spieth.

Thanks to a friend who was a part of the College of Hospitality, Retail and Sport Management, I reached out to an instructor within the college who had direct connections to Augusta National. Augusta National recruits nearly 350 University of South Carolina students each year to work the Masters Tournament — an honor, privilege and incredible opportunity for students studying in HRSM.

Though I will graduate with a degree in public relations, I found myself itching to apply for the Masters in 2015 and then again in 2017 for one final glance into the mystique of Augusta National. Maybe one day I’ll be a patron at the Masters, wearing something other than a green chef’s coat while I spend far too much money in the Pro Shop. But for now, I’ll cherish the moments that made the 2017 Masters so special and the colleagues who became friends.