When Donald Portnoy looks out into the audience for his final concert as conductor of the University of South Carolina Symphony Orchestra, he will see tangible evidence of his accomplishments in the past 31 years.

Family members, former students and longtime friends will be on hand as Portnoy, who is retiring as leader of the orchestra but will continue to teach at the university, conducts “The Spirit of Romanticism” on April 18 at the Koger Center for the Arts.

“These are students I haven’t seen in years, some who have sent their students here to study,” Portnoy says. “It will be nice seeing them again. It’s nice to know that you may have had some impact on people.” 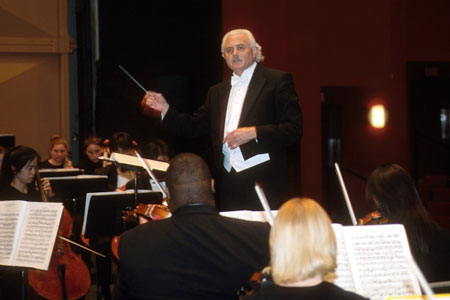 Donald Portnoy will conduct his final concert as leader of the USC Symphony Orchestra on April 18. Portnoy has led the orchestra for 31 years.

Portnoy accepted the Ira McKissick Endowed Chair for the Fine Arts at the university in 1986. A Julliard-trained violinist who has served as conductor of the United States Chamber Orchestra, the Pittsburgh Civic Symphony, the Pittsburgh Opera Theater and the Augusta Symphony while conducting extensively in Europe, Asia and South America, Portnoy also established the university’s world-renowned Conductors Institute. The summer program for both aspiring and experienced conductors is a source of pride.

“What I love to do is build programs,” said Portnoy, who received Columbia University’s distinguished Ditson Conductor’s Award in 2004. “My whole life has been making music. I am a violinist, a performer, in addition to being a conductor. The joy is making music and trying to build something that people enjoy coming to.

“I want people to leave my concerts saying, ‘God, that was great.’ ”

It’s safe to say that has happened once or twice as Portnoy built the USC Symphony into both a showcase for students’ skill and a prized community resource.

“Most university orchestras are designed primarily for the students,” says Tayloe Harding, dean of the School of Music. “Our orchestra is designed to benefit the students and the audience, the people that he’s attracted to it, like a professional orchestra.”

The joy is making music and trying to build something that people enjoy coming to.

That was Portnoy’s goal from the beginning of his tenure, when he proposed a radical new approach to performing. Unimpressed with the building presented to him as his new orchestra’s home, he asked where the city orchestra played, and was told the Township Auditorium.

Portnoy doesn’t sound much like a man easing into retirement — largely because he’s not. He’ll continue to conduct the Aiken Symphony Orchestra he helped found in 2015 while teaching violin and at the Conductors Institute. He’s also discussing recording projects with a European orchestra and plans to return this summer to China, where he has served as principal guest conductor for the National Chinese Dance and Opera Orchestra in Beijing and the Harbin Orchestra in Harbin.

“What am I going to do? I’m not a golfer. The tennis I play is horrible,” he says.

Portnoy’s grand finale concert will feature Israeli guest artist Vadim Gluzman, who will play Tchaikovsky’s Violin Concerto in D Major on his 1690 Stradivarius. Tickets are $30 for the general public and on sale by phone at 803-251-2222 or online.

“Giving students and the audience an opportunity to work with and hear great international soloists — I think that has been his greatest achievement,” Harding says. “We hope to sustain his model into the future, but his way of doing it comes to an end, and that’s going to be bittersweet. It’s going to be emotional for many of us.”