Christopher Harvin was in trouble. Not “go to jail” trouble, but bad enough. He’d gotten in a fight at school, and his parents were on their way to pick him up. 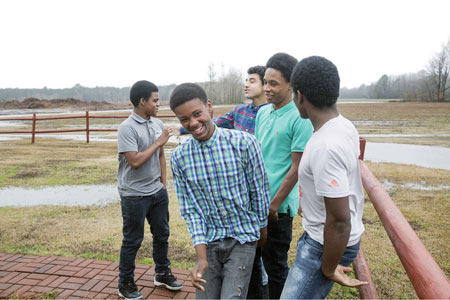 The Cold Case Project helps children who have lingered in foster care get adopted or establish meaningful contact with a family member or adult friend who will be there for them down the road.

As a 13-year-old who had spent several years in foster care, Christopher was afraid that his nearly brand-new adoptive parents, William and Marie Harvin, weren’t going to cut any slack.

“I thought they were going to send me back to foster care,” says Harvin. “But those words never even came up. I got punished, sure, but it felt just like I was family. Looking back, that was the moment when I knew I was going to stay, that this was home.”

Spend a little time with the Harvins and it’s hard to imagine any scenario in which this couple would ever think about breaking the ties that bind. Married 49 years ago, soon after graduating from high school, they live on family land in the tiny S.C. community of Alcolu in Clarendon County.

Early in their marriage they had a son and a daughter, but when those two were grown, the Harvins were not happy with an empty nest. Each had grown up in large families and were accustomed to having children around.

“So we were therapeutic foster parents at first,” says Marie Harvin, a minister at Greater Laurel Hill A.M.E. Church, “but the children kept going in and out of the house. We wanted to give them stability.”

So they began adopting boys from foster care. First came 5-year-old Jaylen and his brother, Isaac. More followed, including Christopher, Seth, Joseph, Levi, Simon, Treyvaughn, Jordan, Christian and Zechariah. In the past 13 years, the Harvins have adopted nine sons, five of them still at home and attending high school.

“It was never our intention to adopt this many, but when they kept bringing them to us and saying, ‘This one needs a mother and a strong father figure,’ we just kept on adopting,” Marie Harvin says. William agrees: “One of the motivations for me was that all the boys would be graduating high school with their diplomas. I kept thinking, if I can help some more, I’d give it a try. That’s how we kept going.”

If every child in foster care in South Carolina who could not return home had the good fortune of being adopted by parents like the Harvins, the state Department of Social Services could close the books on much of its foster care caseload of roughly 4,000 children — and breathe a sigh of relief.

Unfortunately, while the state’s foster care population declined by more than 35 percent from 2007 to 2012, the number of children in foster care is now edging back up, a trend that’s also playing out nationally. Also troubling is 2016 data that showed 7 percent of those in foster care in the Palmetto State turned 18 without finding a family. “Discharged to emancipation” is the legal phrase for aging out of foster care, and while it sounds benign, it definitely is not.

“When a child ages out of foster care, we have failed them in so many ways and set them up for a much more difficult transition to adulthood,” says Christopher Church, director of the Cold Case project in USC’s Children’s Law Center. “Yet it’s often a matter of routine. They turn 18, and there’s no meeting where we sit around the table and say, ‘My God, how did we let this happen?’ ”

Outcomes for children who age out are frightening. Without real ties to family members or responsible adults who care about them, they’re at much higher risk of becoming homeless, abusing alcohol and drugs and landing in jail.

Church’s boss is Michelle Dhunjishah, director of the Children’s Law Center in the School of Law.

“When the government intervenes and takes a child out of a home, if we, as a child welfare system, can’t rehabilitate the biological family, we owe that child a new family,” Dhunjishah says. “We have that responsibility because we’re the grown ups. It’s not just on the Department of Social Services but on all of us as a society.”

Fresh eyes on the case

That’s where the Cold Case Project comes in. Established about three years ago in the Children’s Law Center with funding from the Casey Family Programs, Cold Case goes to bat for S.C. children who have lingered in foster care for years. The goal is to help them to be adopted or to at least establish meaningful contact with a family member or adult friend who will be there for them down the road.

Deborah Trapp, a former caseworker with DSS and part-time master’s of social work student at USC, is a child advocate for Cold Case. She knows how overwhelming the work load can be for DSS caseworkers.

Stability is not permanency. The children are safe, but they’re not moving closer to family.

“They often don’t have time to read the case files like we do,” says Trapp, the mother of two elementary school-age children. “These files are large — boxes and boxes in some cases — and it might take us a whole day to read through one. But buried in there we might find an individual’s name that can lead to adoption or permanency.”

A typical Cold Case file could involve a child who lived with extended family for several years until the child was moved to foster care. After several years in foster care, the DSS caseworker assigned to the child might not be familiar with the family history nor have time to sift through boxes of files to find out what happened.

“But Cold Case advocates have only a few cases on their plate, so more time to ask questions and investigate thoroughly,” Dhunjishah says. “Perhaps a foster parent could no longer care for a child due to a crisis like the death of a family member. But now, the crisis has passed. Has someone talked to Mrs. Smith, the foster parent from 3 years ago and asked could the child go back to her now?”

One of Trapp’s former Cold Case colleagues, Daniel Gibbs, is now an attorney for DSS. “One of the virtues of Cold Case is being able to take the time with the case files,” Gibbs says. “I had the luxury to think and pause and do the work everyone wishes they could do.” 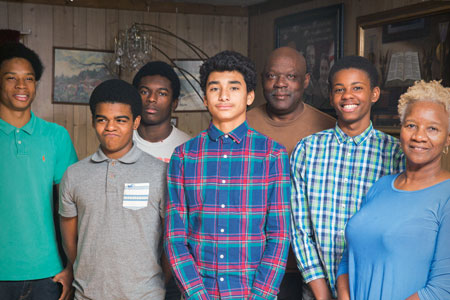 William and Marie Harvin have adopted nine sons from foster care, five of them still living at home and attending high school.

To be frank, the Cold Case project is not focused on cute toddlers who just need a little cuddling.

“The perception is that these kids’ behavior is bad — they’ve often been traumatized by something that happened in their biological homes and they’re acting out — so they end up in a group home or in a series of foster homes,” Trapp says. “This perception follows them and complicates efforts to recruit new families.”

When Marie and William Harvin adopted Treyvaughn, he was 10 and had already been returned to foster care by one set of adoptive parents. He was on several medications — 36 pills a day at one point — and attended a special needs class. At home he rolled on the floor, screaming and flailing so much so the Harvins wondered whether they had the stamina and patience to help him.

Now he’s 16, reading above grade level and contemplating college. He looks a visitor in the eye when he quietly talks about his dreams — playing college football and pursuing a military career. “He’s my miracle child,” Marie Harvin says.

Such miracles are rare in foster care, says Church. More often, children like Treyvaughn don’t get adopted at all and achieve only a measure of stability in their lives.

“But stability is not permanency,” Church says. “The children are safe, but they’re not moving closer to family. And a sense of complacency develops in the child welfare bureaucracy. More than anything else, that’s what Cold Case tries to do: bring a sense of urgency to helping these children who are slipping through the cracks.”

Cold Case has teamed with Family Court Judge Jay Vinson in Florence County to fast-track robust permanency planning hearings for foster care children in that county. Vinson is “willing to take some risks and do things a little differently when called for,” Dhunjishah says. “He really believes in it and wants this model to go everywhere.”

Still, success has been difficult to achieve. “Our cold cases are getting harder and harder to resolve,” says Church. “We’re working with complex families with complex problems, and when we take on the coldest cases with near-zero chance of what our system would measures as success, it is important to consider whether we are helping these families achieve their own version of success.”

Parents who have adopted nine boys in the past 13 years can’t be cloned, but their practice of adopting children out of foster care is being replicated.

The Harvins’ own daughter, Melissa Calvin, a Carolina early childhood education graduate, has three children of her own and adopted three more. Many of the Harvins’ extended family and neighbors have followed the couple’s example, as well.

And Christopher, their adopted son who once struggled with anger issues, is now in the U.S. Air Force and often devotes time to advising prospective parents and talking to high school students — some of whom are in foster care themselves — about his own pathway to success.

“Most foster kids have seen someone die, had something traumatizing happen to them,” Christopher says. “So they can’t be the perfect little kid you’re looking for. Patience is the key thing. If you want to give the best possible thing, you’ve got to have patience.”

His dad, William, echoes his adoptive son’s advice: “Adoption is just like a job. You got to learn these kids, they got to learn you. Not every thing is going to be hunky dory, but if you show love, you can overcome a lot of things.”