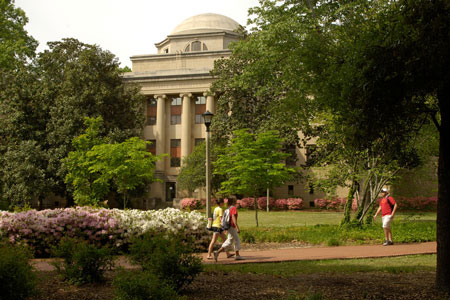 More than 3,500 student applied for Carolina's top scholar awards, making 2017 the largest and most competitive applicant pool in Carolina's history.

"We are delighted to welcome a new class of Top Scholars to the university, knowing they are among the best and brightest scholars in our state and across the nation,” says Scott Verzyl, Carolina’s associate vice president for enrollment management. "These students were selected among thousands of their peers for the University of South Carolina's most prestigious scholarships, and will step onto campus this fall as leaders inside the classroom and beyond. Our Top Scholars have tremendous opportunities to make this world a better place as students and later, as alumni."

More than 3,500 students applied for Carolina’s top scholar awards, making it the largest and most competitive applicant pool in the university’s history. The university invited 96 scholar candidates to campus to compete for these awards.

With generous support from the Atlanta-based Stamps Family Charitable Foundation, this year the university was able to complement its five in-state Stamps scholarships with five scholarships to out-of-state students.

The Stamps Scholars has a monetary benefit of up to $20,000 per year for four years, plus $10,000 to be used for enrichment opportunities including undergraduate research, study abroad, service projects or trips or unpaid internships during their undergraduate tenure.