From trooper to magistrate, with help from Palmetto College 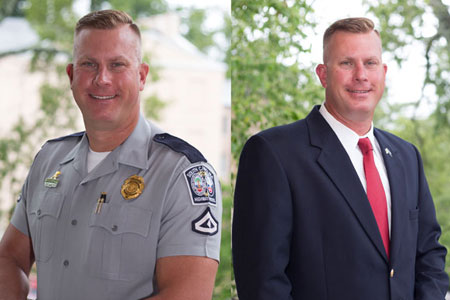 D.J. Bron has been sworn in as a magistrate in Laurens County after earning his degree from the University of South Carolina Upstate through Palmetto College.

With his newly earned degree from the University of South Carolina Upstate, D.J. Bron traded in his S.C. Highway Patrol uniform for a magistrate’s robe this summer.

It’s a career move he couldn’t have imagined when he graduated from high school in 1995. Back then, college wasn’t anywhere near the top of his priority list. Instead it was a job, then basic training at Fort Jackson and active duty in the Army National Guard before becoming a trooper with the state Highway Patrol.

“In high school, I didn’t hang out with scholars. We didn’t look at life past high school,” Bron says. “That’s part of my past I regret. I had colleges looking at me for footbalI. I thought I was so good at football that my grades didn’t matter. I found out the hard way.”

Soon after he finished Highway Patrol school in 1998, Bron started thinking about his future. Stationed in rural Allendale County, he rode past the USC Salkehatchie campus every day. He knew he would need a college education to advance in his career, so he decided to enroll and take a few classes at Salkehatchie.

In 2000, the Highway Patrol transferred him to Newberry County, and although it was closer to home, the busy job and long hours made it tougher to squeeze in classes. Eventually, he enrolled at USC Union and earned an associate degree.

“D.J. Bron is exactly the type of student that Palmetto College was created to serve,” says Palmetto College Chancellor Susan Elkins. “As he worked to keep our state safe, he was able to pursue an associate degree at two Palmetto College campuses. And completing a bachelor's degree from USC Upstate through Palmetto College Online provided a degree of professional advancement that might otherwise have not been available.”

He was promoted to corporal with the S.C. Highway Patrol in 2012, so he estimates he completed 80 percent of his Palmetto College classes while he was a supervisor.

“They created this program to help people in my position who can’t go to classes. In the patrol, I was bouncing between three counties. This program allowed me to take classes at home, even at 3 in the morning,” Bron says. “It was stressful. My schedule was 7 a.m. to 7 p.m. or 6 a.m. to 6 p.m., but it doesn’t mean I’m home by that time. I’d come in, take a shower and jump on the computer and do what I could.”

He found himself wondering whether the time and money were worth it. “I thought, ‘It’s going to take me forever. I’ll be 40 by the time I finish,’ ” he says. “Then somebody told me, ‘Well, you’re going to be 40 either way, and whether you have a degree or not is up to you.’ An education is one thing they can’t ever take away from you if you get it.”

There were setbacks along the way. In 2015, when the Columbia area suffered historic flooding, he worked 18-hour days with the Highway Patrol. In 2016, he was deployed four times to the coast for hurricane duty.

He pushed ahead, and in December 2016, Bron earned his bachelor’s degree in criminal justice from USC Upstate through Palmetto College

“When I finished my degree, it opened more doors to me. There were a lot of occupations out there that were adamant you had to have a four-year degree,” he said.

One of those doors opened in his home of Laurens County, where he learned the magistrate planned to retire early in 2017.  “Now that I had a four-year degree, I threw my name in the hat.”

He was offered the job and confirmed on the Senate floor last spring. He was sworn in June 30 and will preside over low-level offenses in magistrate’s court.

“It was kind of unexpected. I wouldn’t have been able to even consider this position without a degree,” Bron says.

Now he says he works to convince others of the importance of a college degree, including one of his friends on the Highway Patrol who has an associate degree.

“I talk to him every chance I get. I tell him you’re stuck right now. It’s just 30 more credits, and they can’t take it from you once you get it,” he says. “It’s better to do it now than wait 10 years and say I should have done that. I hate to study. I hate writing papers. I’m not good in math. But I did it. It will better to prepare you for life. Don’t stop short now.”