Though it’s a contentious issue, Dr. Gerald Harmon thinks there’s no better time to be a leader in health care in America.

Harmon, a 1973 graduate of the University of South Carolina, a longtime Georgetown physician and vice president of Tidelands Health Group, was recently elected chair of the board of trustees of the American Medical Association. Harmon, named chair-elect in 2016, has served as an AMA trustee since 2013 and joined the executive committee as secretary to the board in 2015. 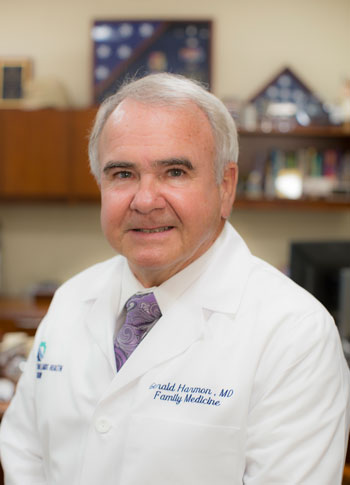 Gerald Harmon, a 1973 graduate of the University of South Carolina and longtime Georgetown physician, has been elected chair of the board of trustees of the American Medical Association.

Founded in 1847, the AMA is the largest association of physicians in the country and an influential voice in the national health care debate. The organization publishes the Journal of the American Medical Association, the largest weekly medical journal in the world, and has been a vocal opponent of the American Health Care Act, the alternative to the Affordable Health Care Act passed by the U.S. House of Representatives in May.

“This is a great time to be a leader in American medicine,” Harmon says. “Clearly, medicine is front and center in everyone’s headlines these days. Everything has a health care bent to it. It’s 20 percent of the nation’s economy. It’s the largest employer in South Carolina. There’s no more exciting time.”

Harmon will help formulate the organization’s positions on key issues and create task forces to develop solutions to important topics. He has concrete goals to achieve during his tenure — chief among them alleviating the excess burden of paperwork and other administrative duties that keep doctors from interacting with patients as much as they’d like.

“One of the key strategic pillars of the AMA focus is to improve physician satisfaction,” Harmon says. “We’ve got to make sure physicians are satisfied with the practice of medicine, and that means they get some relief from somewhat arbitrary regulatory burdens — the electronic records that we all fight with, the computers that we’re married to when we’re trying to deal with patient care.

“I spend a lot of time on my keyboard and my screen when I should be talking to people and using my stethoscope. We need to somehow make doctors, if not happier, at least less frustrated.”

A Newberry, S.C., native, Harmon studied physics and mathematics at Carolina. “I had no idea I would be a doctor,” he says, but he began to consider the profession when contemplating post-college employment. Intrigued by a professor who was a Naval Reserve officer, Harmon looked into military programs to finance medical school.

This is a great time to be a leader in American medicine.

A 1976 graduate of the Medical University of South Carolina, Harmon has practiced medicine in Georgetown County since 1983 and has held several leadership positions in the S.C. Medical Association, including chairman of the board and president. He also serves as a clinical professor of family medicine at the University of South Carolina School of Medicine and MUSC and has twice been named Community Educator of the Year by the South Carolina Academy of Family Physicians.

“Dr. Harmon is widely recognized for his selflessness, vision and ability to work with others to find common ground,” says H. McRoy Skipper Jr., chairman of the Tidelands Health board of trustees. “He embodies the traits you want in a leader at a time of such deep divisions on a topic — health care — that’s so crucial to the future of our country.”

Harmon has been asked why, after 41 years in practice and still seeing thousands of patients, he wanted to take on the AMA position. His answer: He wants to keep making a difference.

“I think that we have an opportunity here,” he says. “Health care is a big deal. It’s part of our economy, it’s part of our social experience. We are tied to health care. If you go to any social gathering, pretty soon you’re going to start talking about your experience with joint replacement surgery or an ER visit.

“It permeates our day-to-day lives, and I like to be part of the solution versus just a cog in a machine.”