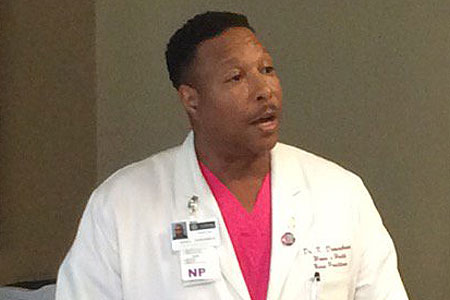 Kahlil Demonbreun, '94 BSN, '98 MSN, says women have formed the foundation of his success, from his grandmother who raised him to his wife, an internal medicine physician.

Kahlil Demonbreun always knew what he wanted to do, even if he couldn’t put an exact name to it.

Demonbreun, the 2016 recipient of the University of South Carolina College of Nursing Alumni Award, grew up in Michigan surrounded by strong women whose influence led him down a somewhat unusual career path.

“I knew very early in life, probably about 14 or 15, that I wanted to be what I now understand the role of a nurse practitioner to be,” Demonbreun says.

After earning his registered nurse license through the Henry Ford Hospital School of Nursing in conjunction with the University of Michigan, Demonbreun began looking for additional educational opportunities. That search led him to Carolina, where he received his bachelor’s degree in nursing in 1994 and his master’s in 1998. Demonbreun, who received a Doctor of Nursing Practice from the Medical University of South Carolina, is currently the women’s health medical director at the WJB Dorn Veteran Affairs Medical Center.

While male nurses are not rare, male women’s health nurse practitioners are not commonplace. Demonbreun says males make up roughly 11 percent of the country’s 3.4 million nurses.

“When a provider, whether it’s a male or a female, comes into a room, you have about a minute to say, ‘OK, I can work with this provider,’ or ‘I cannot work with this provider,’” he says. “When I walk into a room for the first time, the advantage that I have is that I’m different than what the patient might be used to or what they might have been expecting. This difference opens them up. I have to make the patient at ease and earn their trust.”

“Our profession is really about caring for other humans. It’s about helping people have a better life, a better state of health. I think I was destined to do that.”

Demonbreun is a fellow in the American Association of Nurse Practitioners, is the AANP’s South Carolina representative and serves as an adviser on the association’s health policy committee. He is also on the Board of Directors for the National Certification Corporation and the Board of Directors for the South Carolina Nurses Association. He credits Carolina faculty members with inspiring him during his early days in nursing education.

“There were a lot of influential males there who I could emulate,” Demonbreun says. “None of them were in women’s health, but they inspired me because they were national leaders.”

While men provided motivation in college, women have formed the foundation of his success. Demonbreun, whose wife is an internal medicine physician, has two daughters and was raised by his paternal grandmother.

“She was a pretty straightforward person and a disciplinarian,” he says. “She set a standard of work ethic and a belief that if you worked hard at something, you could achieve it. She was always a giving person, willing to go the extra mile for anyone, so obviously that set an example of what kind of person I should be.”

Demonbreun was honored along with Stacy Collier, the chief nursing officer of KershawHealth in Camden, S.C., this past November. Collier, who received her bachelor’s degree from Carolina in 1997 and her master’s in 2000, was a Palmetto Gold Nursing Excellence Award winner in 2006 and is vice president-elect of the USC College of Nursing Partnership Board.

Demonbreun says a large part of his longevity is thanks to the women who’ve supported his practice — including the ones who sometimes name babies after the man who delivered them.

“That’s a testament to the work. People do appreciate when you care for them,” he says. “Our profession is really about caring for other humans. It’s about helping people have a better life, a better state of health. I think I was destined to do that.”