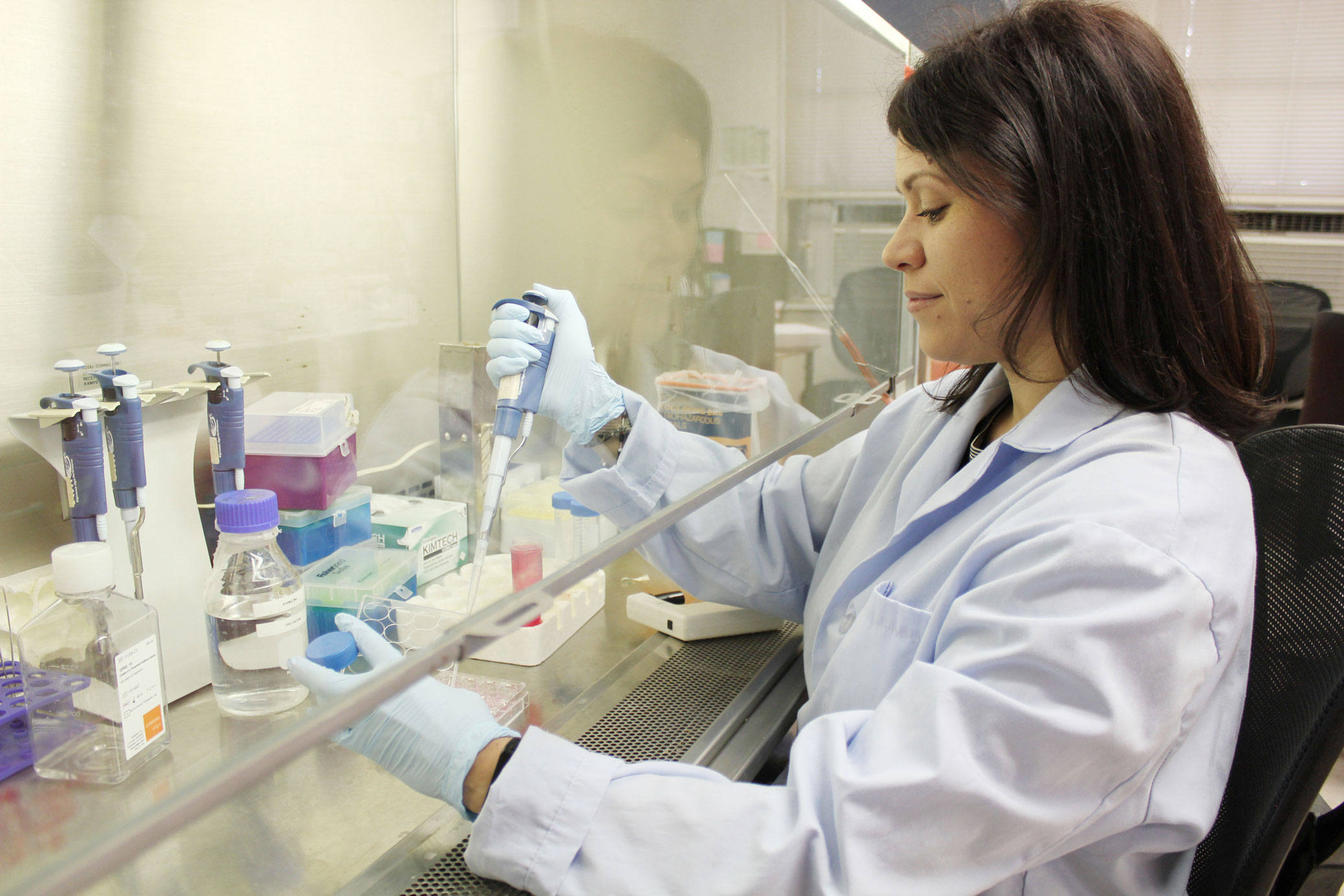 The daughter of two teachers, Kandy Velázquez developed a passion for learning early. From a young age she also knew she was interested in science, but she fell in love with research while studying at the University of Puerto Rico under the guidance of Dr. Juan Carlos Jorge.

“I love research because it can answer questions,” Velázquez says. “Any question that you have, you can answer with science.”

However, her research took a more personal turn when her aunt Eva Velázquez was diagnosed with breast cancer for the second time while Kandy Velázquez was completing her Ph.D. in exercise science at the University of South Carolina’s Arnold School of Public Health.

“When she was in the months where it was really critical, I went to Puerto Rico to see her. She was being treated with a lot of morphine. That was hard because we knew that she didn’t want that,” Velázquez says.

Eva Velázquez passed away at the age of 52, and her niece decided to shift her research efforts toward easing pain. After completing her doctoral degree in 2012 and teaching at USC Upstate for a year, Velázquez returned to Columbia to pursue a postdoctoral fellowship with Angela Murphy, an associate professor in pathology, microbiology and immunology in the School of Medicine.

“I knew I wanted to continue pursuing research, and I wanted to be in a place that has a medical school and a main campus, so there was more access to collaboration between professors. So, USC was a great fit,” Velázquez says.

In 2016, Velázquez received an ASPIRE grant from the university and began studying the use of natural supplements to treat cancer pain. She also began working with Murphy on an application for a Pathway to Independence Award from the National Institutes of Health. This fall, Velázquez’s submission was approved, and she will receive nearly $1 million to fund her research on how ojeok-san, a traditional herbal formula, might help curb pain for cancer patients.

“I hope the work I’m doing now will make things a little bit better for cancer patients like my aunt,” she says. “If natural supplements like ojeok-san can be used in combination with opioids to manage pain, then maybe the patient can be more conscious, talk to their family and be more active in their own care.”

Velázquez is only the second researcher at the School of Medicine to receive the Pathway to Independence Award, which is designed to facilitate a timely transition from a mentored postdoctoral research position to an independent research position.

I knew I wanted to continue pursuing research, and I wanted to be in a place that has a medical school and a main campus, so there was more access to collaboration between professors. So, USC was a great fit.

Velázquez will work with Murphy and three other faculty mentors over the course of the grant, including Mitzi Nagarkatti, chair of the pathology, microbiology and immunology department and SmartState Endowed Chair of Center for Cancer Drug Discovery; Daping Fan, an associate professor in cell biology and anatomy; and Richard Johnson, a University of Florida College of Veterinary Medicine professor.

“All of us bring unique experience in different areas,” Murphy says. “Our role in the next two years will be to make sure Kandy gets the training that she needs in those areas. The goal is that after two years, she’ll be ready to start her own independent program.”

This winter, Velázquez will spend four months at the University of Florida learning the proper techniques for measuring pain responses. Upon her return she’ll begin collecting data. She hopes to eventually pursue a clinical study with humans.

“I’m excited to continue my research. Everyone experiences pain in one way or another at some point in their lives,” Velázquez says. “I hope my work can lead to new pain treatments and reduce the use of harsh opioids and their adverse effects.”