Many of the beads are from Italy, and the pipes have European origins. However, Goldberg collected the items during a recent trip to Guinea, Africa. Part of a research project on the transatlantic slave trade in the 1800s, the artifacts help Goldberg connect sites in West Africa with Europe, America and specific time periods.

“All these layers together tell the story,” says Goldberg, who has visited Guinea on three occasions during her time as an anthropology graduate student in the College of Arts and Sciences.

Most recently, she spent seven months in Africa, splitting time between a village along the Pongo River and Guinea’s capital, Conakry, as part of a Fulbright fellowship. Goldberg conducted archaeological excavations of a historic slave trade site near the modern village of Bakoro, hiring local residents and staff from the national museum as archaeological assistants. 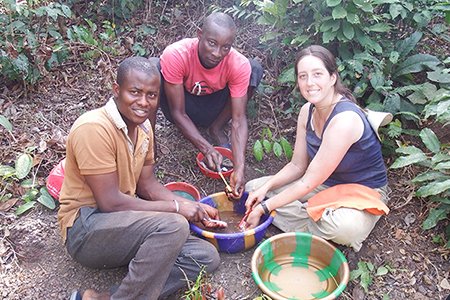 Anthropology graduate student Kelly Goldberg washes artifacts with two assistants near a stream in Guinea, Africa. Goldberg has traveled to villages in the Rio Pongo region on three occasions during her studies at Carolina.

She worked with the national museum to curate a public exhibit of artifacts recovered from these excavations, highlighting the importance of preserving the region’s past.

Goldberg, who completed her master’s degree in anthropology from Carolina in 2014 and then entered the doctoral program, credits the university and anthropology professor Ken Kelly with opening doors for her to explore her research passion and make an impact on the lives of others across the world.  She initially traveled with Kelly to Guinea in 2013 and returned to Guinea on her own in 2016 and 2017.

“It was clear from that first visit that she was hooked on the exciting possibilities of developing the first archaeological research program in that country since the late 1960s,” says Kelly.  “It is testament to the relevance of her work that she has been the recipient of several very competitive research funds including, of course, the Fulbright.”

Goldberg is a current Billinski Foundation fellow and has received a SPARC Graduate Research Grant as well as support from the Walker Institute and the Institute for African American Research.

“The university cares about international research and recognizes the importance of making these connections,” says Goldberg. “People might ask ‘how does Carolina impact the world beyond the borders of South Carolina?’ By encouraging me to research these historical connections and look at global communities. Through these international experiences, I grow as a student and researcher, and will continue to be inspired to search for global connections throughout my career.”

Goldberg applied to Carolina’s graduate program in anthropology so she could work with Kelly, one of the world’s few archaeologists who studies the material record of slavery and the slave trade in the Caribbean and Africa.

People might ask ‘how does Carolina impact the world beyond the borders of South Carolina?’ By encouraging me to research these historical connections and look at global communities. Through these international experiences, I grow as a student and researcher, and will continue to be inspired to search for global connections throughout my career.

During her first trip to Guinea, she taught archaeology techniques to Guinean undergraduates as part of a field school. Since then, she’s worked with Guinean educators to develop a master’s level archeology program at the Université Général Lansana Conté de Sonfonia.

The research and overall experience in Africa presented challenges from a cultural perspective. Goldberg speaks French fluently, but women in the Rio Pongo villages do not as the language is taught at primary and secondary schools, which girls of the rural villages rarely attend. Goldberg said she would sometimes go two weeks without speaking at length to another female.

Kelly Goldberg helps the mother of the house where she stayed near Bakoro, Guinea, pound rice. Goldberg recently spent seven months conducting archaeological excavations of a historic slave trade site near the village of Bakoro.

Culturally, it is rare for men in Rio Pongo villages to take directions from women, which presented obstacles when Goldberg returned to Guinea in 2016 without Kelly. She developed creative tactics to overcome these challenges, accomplished tasks for the research project and forged lasting relationships.

“Coming back repeatedly to the same village, I was embraced as a member of the Bakoro community, and treated as family,” she says. “Just by returning, I was showing them that I was invested in the project and cared about the residents of the community, as well as sharing the local Rio Pongo history with the rest of the country.”

Goldberg’s work enables her to give back to a field she’s loved since she went on her first archeological dig as an undergraduate.

“I think just by uncovering the interactions and acknowledging that the slave trade was expansive and continued so much longer and impacted the economy in South Carolina, America and Africa increases our overall understanding,” Goldberg says. “We do not have progress without asking questions. You have to talk about the past. We cannot undo history but we can educate people about the untold stories.”