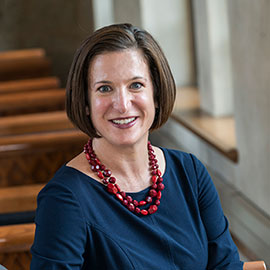 Kristin Heyer is professor of theological ethics at Boston College and author of "Kinship Across Borders: A Christian Ethic of Immigration."

The 18th annual Cardinal Joseph Bernardin Lecture in Moral, Ethical and Religious Studies is free and open to the public.

Cardinal Joseph Bernardin was a first-generation American whose parents moved from Italy to Columbia, South Carolina shortly before his birth in 1928.

Because the immigrant experience was a large part of the renowned Catholic leader’s life, it’s fitting that the lectureship in his honor this year will focus on his teachings in relation to the current national dialogue about immigration in American society.

Author of "Kinship Across Borders: A Christian Ethic of Immigration," Heyer says today’s immigration dialogue often has been framed in terms of crisis management alone.

“The lenses that shape the quickly shifting immigration debate in the United States can distort the realities that migrants face and become surrogates for other cultural and political concerns,” Heyer says. “Focusing solely on economics or fear-based approaches too often de-humanizes newcomers. In my Bernardin lecture, I will explore contributions that scripture and the Catholic social tradition offer the immigration dialogue in light of these realities.”

Heyer is the perfect scholar to explore Bernardin-style answers to questions about social justice that have emerged in the United States in recent years as the issue of immigration has grown increasingly charged, says Steven Millies, associate professor of political science at USC Aiken.

Millies, who has served on the Bernardin lecture committee for five years, suggested Heyer as a speaker because of her service and scholarship.

Heyer’s research focuses on the ethics of immigration, Catholic political engagement, moral agency and Christian social ethics. She is author of “Prophetic and Public: The Social Witness of U.S. Catholicism.” Heyer also serves as an editor for Georgetown University Press' Moral Traditions Series and on the board of Catholic Theological Ethics in the World Church.

“In her work, Dr. Heyer writes about the Brazilian proverb, ‘The head thinks from where the feet are planted,’” Millies says. “That’s just another way of saying Dr. Heyer has written the books. She has done the research in the library, but she’s also been on the ground at the border working with an organization that provides human support that people in difficult situations need.”

The Joseph Cardinal Bernardin Lecture was established in 1999 to honor the Columbia native who attended Carolina and became a leader in the Roman Catholic Church. Bernardin was the archbishop of Chicago at the time of his death in 1996. One of the university’s premiere lectureships, the annual talk is sponsored by the College of Arts and Sciences and its Department of Religious Studies. This year’s event is also being sponsored by the Walker Institute and the Women’s and Gender Studies program.