A diagnosis of lung cancer used to be a near-certain death sentence, but as early detection of the disease continues to improve and treatment becomes more effective, survivors are growing in number. 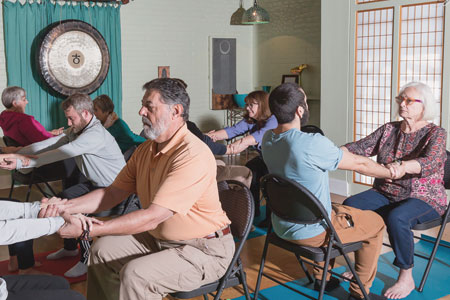 Mindfulness-based cancer recovery is based on the foundation of mindfulness-based stress reduction, developed by a now-retired medical professor at the University of Massachusetts Medical School.

But just because they’re living longer and sometimes even cured of the disease, long-term survivors of lung cancer often must cope with distressing symptoms such as shortness of breath, fatigue, depression and anxiety. Karen Kane McDonnell, a nursing professor in USC’s College of Nursing, plans to test an intervention to reduce their symptom burden.

She’s implementing a two-year, $750,000 grant from the Bristol-Myers Squibb Foundation’s  Bridging Cancer Care to launch a pilot study with lung cancer survivors and their significant others, adapting a program known as mindfulness-based cancer recovery, created by Linda E. Carlson, director of psychosocial oncology research and a clinical psychologist at the Tom Baker Cancer Centre in Calgary, Canada. The intervention is based on the foundation of mindfulness-based stress reduction, developed decades ago by Jon Kabat-Zinn, a now-retired medical professor at the University of Massachusetts Medical School.

The eight-week program, called Breathe Easier, will include a regimen of breathing exercises, gentle yoga-like movements and meditations. “We want to help survivors and their significant others improve their ability to manage symptoms and improve their quality of life,” McDonnell says. “Unresolved symptoms negatively impact their sense of well-being and can be very isolating.”

McDonnell is working with a team of clinical and research faculty from the School of Medicine, the College of Social Work and the Department of Computer Science and Engineering to test the intervention and consider ways to develop it as a future mobile application so that survivors and their significant others can access the program from home.

The recruitment process for the face-to-face program has started and the first 8-week session began this past summer, and McDonnell’s goal is to enroll as many as 40 survivors of non-small cell lung cancer who have completed medical treatment. Their significant others — spouses, close friends or other family members — will join them. The program will take place at Upstream: A Center for Mindfulness Practice & Holistic Mental Health in Columbia, founded by College of Nursing alumna Jemme Stewart and T. Hilda White, who are also research team members.

“It is important to recognize that both survivors and their family members and close friends react to serious illness, and as a result they both have a genuine need for support from health care providers,” McDonnell says. “Partners not only provide emotional and practical support, but they have to cope with their own concerns, including the stress and uncertainty surrounding the course of the illness and fear of losing their partner.”