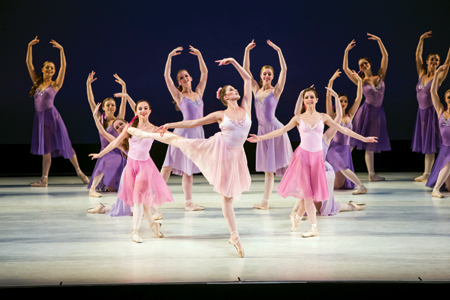 Stacey Calvert has been a devotee of choreographer George Balanchine since she was a young dancer. “The choreography is brilliant; it’s beyond brilliant,” she says. "It’s super organic to dance. As a dancer, it makes perfect sense.”

That is why Calvert has staged a Balanchine program every spring for the past 14 years as a dance professor at the University of South Carolina.

“He incorporated streamline, quick movements. He took the classical technique a little farther, made it a little more exaggerated,” says Calvert, who attended Balanchine’s School of American Ballet and became a soloist for the New York City Ballet that Balanchine founded.

Calvert has been approved by the George Balanchine Trust to stage his works, which unlike classical ballet, don't follow a storyline.

“He allowed arm movements to soften — where they normally go through a very proper position, he allowed them to move through the position,” Calvert says. “It’s the most amazing thing to dance, so amazing on your body when you’re doing it.”

As part of her staging, Calvert puts her dance students alongside professionals from the New York City Ballet.

Calvert's own path crossed briefly with Balanchine, who established the New York City Ballet in 1948 and was its creative director until his death in 1983.

“He changed the face of American ballet,” she says. “He took the art form from rigid to what it is now.”

Before the spring 2018 show, for which Calvert has not yet chosen the program — “I’ll have to see what our dancers can do,” she says — she will stage Balanchine’s "Walpurgisnacht" for the USC Dance Company’s Fall Concert, which will include three other works.

The "Walpurgisnacht" scene comes at the beginning of the opera “Faust,” when the souls of the dead are released to wander.

“It’s wonderful,” says Susan Anderson, artistic director of the USC Dance Company. “The girls start with their hair up, and their hair is down by the end. It is light and effervescent — pure movement — there is a lot of running, a lot of arm gestures.”

The fall concert will also include a new work choreographed by instructor Heather Stokes to “Suite of Old American Dances,” by American composer Robert Russell Bennett. Anderson describes this work as a fusion of several styles including jazz, modern dance and ballet.

“The music is the dictator,” she says. “It will be en pointe, but jazzy.” USC Symphonic Winds will play the score for this finale piece.

The concert will include a new piece by associate professor and choreographer Thaddeus Davis, whose style combines contemporary ballet and Balanchine’s neoclassical style. “He creates pure magic,” Anderson says.

In addition, guest artist Miriam Barbosa is creating a new work as a tribute to Martha Graham, whose contraction and release style became the hallmark of modern dance.