A plague upon us

The numbers tell the story of the opioid epidemic. And the story is tragic.

Ninety-one Americans die every day from an opioid overdose, a figure from the U.S. Department of Health and Human Services that includes prescription drugs and heroin.

The number of drug deaths is rising, with more than 59,000 overdose deaths in 2016. Six in 10 drug overdose deaths in 2014 involved an opioid, such as a painkiller or heroin, according to the Centers for Disease Control and Prevention. Each day, more than 1,000 people are treated by emergency departments for misusing prescription opioids.

The opioid epidemic is driven by overdoses in prescription drugs, heroin and illegally manufactured fentanyl, a synthetic opioid much more powerful than heroin. The epidemic has destroyed lives across the country, and it affects Americans regardless of age, race, wealth or hometown. It’s a complex situation, with no easy fixes. And it shows no signs of improvement.

Researchers at the University of South Carolina are addressing various aspects of the epidemic, focusing on opioid addiction and the Affordable Care Act, the neuroscience of addiction and prescription drug monitoring programs.

“There are a number of people who reach out to me with questions, who are really grasping for answers. There are personal and professional stories across the board,” says Jill Turner, a researcher in the College of Pharmacy. “It’s important for an institution like USC to have a role of leadership, to take a stance and show we care in that we have work going on that’s trying to address these problems from multiple perspectives.”

Jill Turner grew up in West Virginia, one of the states hardest hit by the opioid epidemic. 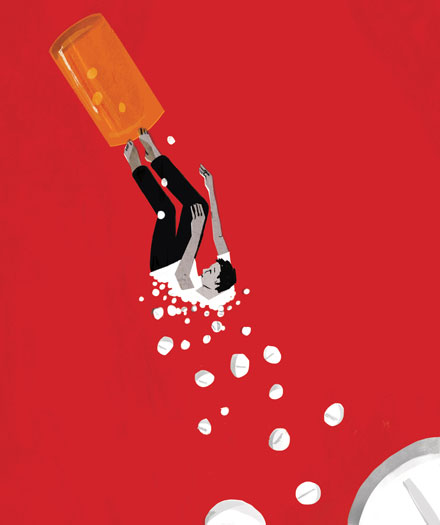 The toll of America’s opioid epidemic is tragic, but UofSC researchers are engaged in the struggle, finding tools that could help turn the tide.

When she returned to her picturesque hometown, population 2,000, after college, what she saw changed her. She had long known that West Virginia struggled with adequate health care and poor health insurance options, but this was different. What started as the over-prescribing of opioids had grown into a full-blown crisis.

“[The town] was decimated by opioids. It was really incredible,” she says. “People who had been all-star athletes were on heroin. I’ve had a number of friends either die or go to jail because of opioids.”

Both of Turner’s grandparents had died from smoking-related cancer, so she originally thought she would conduct cancer research. But the stark image of addiction — both to nicotine and opioids — stuck with her as she moved on to earn a doctorate in neuroscience from Georgetown University and complete a postdoctoral fellowship in neurogenetics at the University of Pennsylvania.

At Carolina, where she is an assistant professor of drug discovery and biomedical sciences in the College of Pharmacy, her research aims to understand the biological factors that make it difficult for smokers and drug addicts to quit. She also looks for ways to tailor treatment based on a person’s genetic makeup.

For example, her research has examined the biomolecules that mediate opiate addiction, known as the mu-opioid receptor. Just a small change in a person’s DNA — one point, one nucleotide — can have a large effect on whether that person becomes addicted. Turner has found that people with a certain variant of the mu-opioid receptor can more easily quit smoking and are less likely to become addicted to heroin or opioids.

Her work aims to understand the biological factors that cause low success rates of smokers and addicts who want to stop, and to learn how to apply that knowledge to personalized medicine. That has led her to pharmacogenomics, also known as precision medicine, which is designed to adapt therapeutics to a patient’s genetic code.

In her lab, that means looking at nicotine and opioids.

Her collaborator in Finland has data from twins collected since the 1970s, allowing researchers to mine data and ask questions about addiction and specific genes, understanding whether people are predisposed to certain addictions.

A key part of the brain — the area that controls executive function — changes with extensive, continued drug use. It’s the area of the brain that lets a person understand both goals and consequences, and it looks completely different in addicts, she says.

“They act without forethought. So, you have an individual, and you can’t take them out of the environment where they may be the only sober person and they have impaired inhibitory control,” Turner says. “That means they have increased impulsivity and they live where opioids are readily available. They are set up to fail.”

Just as a person can’t unlearn how to ride a bike, an addict is always an addict and must learn what triggers drug use and stay away from it.

“Honestly, the brain is very complex. You’re not going to find a single bullet that can help this. To attack it, you have to move outside the idea that there’s one way to fix this,” she says. “We have to change in the way our society views drug addiction and change the way we attack the problem.

“You’re treating depression, anxiety, a whole host of other things. You need to treat the person as a whole, and not just as an addict. That means not only understanding how a person’s genetic code may help, but understanding their family history. For example, screening for epigenetic markers may help us understand how genes and family history interact, leading to better treatment. It’s a brave new world.”

A safety net with holes

Christina Andrews, an assistant professor in the College of Social Work, has watched the opioid epidemic gain more and more attention.

“When it reached a point where the CDC said this is an epidemic, where we are losing more people in a year to opioid overdoses than to AIDS at the height of that epidemic, it was a real wakeup call,” she says.

“Every addiction is different, and this particular addiction is a very powerful one. Considering the risks related to withdrawal and overdose, it’s particularly dangerous.”

Andrews’ research examines the financing of drug abuse treatment systems under the Affordable Care Act, including how insurance plays a role in access to drug treatment. It’s especially relevant as opioid addiction and changes to the ACA have come to the center of the national debate on the future of health care in America.

Addressing the opioid crisis is a complicated balancing act — while there is a push for education, prevention and enforcement to reverse the epidemic, physicians must also ensure that patients suffering from legitimate acute and chronic pain have access to appropriate opioid medications.

The ACA put addiction treatment in the same category as other medical services, meaning it must be covered by existing insurance. The ACA also expanded health insurance through Medicaid and the establishment of state health insurance marketplaces. The opioid epidemic caused many states to consider how they treated drug addictions and find potential opportunities offered by the ACA to help address treatment.

Andrews’ work uses information from the National Drug Abuse Treatment System Survey, a longitudinal survey that has collected data since 1988. Starting in 2013, she began using the information to determine the impact of the ACA on access to and quality of drug addiction treatment programs. She’s now looking at more recent data to see what has changed with the implementation of the ACA, including the number of people being treated for addiction, the number of insured versus uninsured patients, and whether people are getting treatment longer because they are insured.

“The numbers show a three-fold increase in the proportion of clients coming in with opioid addiction,” she says. “We’re looking at data between 2000 and 2017 and have not seen any significant increase in availability of drugs used to treat it despite years of work to achieve that.”

She says insurers were initially slow to cover buprenorphine, which has similar properties to methadone as a drug to treat addiction, but with lower risk of abuse. While insurance companies are offering more coverage for that drug, the system is seeing a decrease in the number of providers offering methadone. And because of concerns regarding fraud and misuse of prescriptions, with few exceptions, each provider can prescribe buprenorphine to only 100 clients per year.”

Andrews’ research has shown that though the ACA covers substance abuse treatment, the programs and other infrastructure aren’t always in place. For example, more than half of addiction treatment programs do not accept insurance, and many state agencies around the country that assist treatment providers aren’t helping the programs figure out ways to accept the insurance, she says. At the same time, many people struggling with addiction aren’t equipped to navigate the red tape of enrolling in treatment programs.

“It’s exciting to think in the humblest way that the work I’m doing could help inform some aspect of decision making and public policy and could help save lives,” she says. “Unfortunately, the epidemic is not showing any signs of abating right now. But it’s good to see some efforts are being made to foster a national conversation about it.” 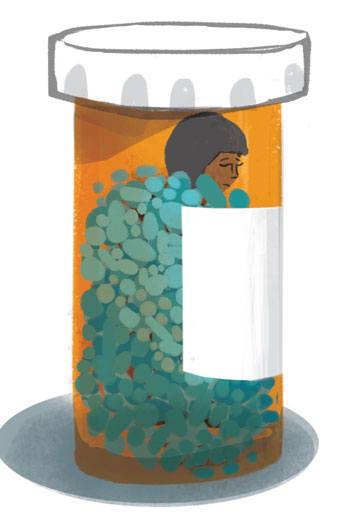 From 1999 to 2013, the amount of prescription opioids dispensed in the U.S. nearly tripled, yet there has not been an overall change in the amount of pain that Americans report.

For Zaina Qureshi, an assistant professor of health services policy and management in the Arnold School of Public Health, information mined from the databases might hold a key to help address part of the opioid crisis. The monitoring programs provide information about a patient’s controlled substance prescription history and can help identify patients who are at high-risk for addiction and could be helped by intervention.

In 2010, Qureshi began working with colleagues at Carolina and other institutions to determine how academic detailing — outreach programs that educate physicians about the drugs they are prescribing — could be used to better understand part of the opioid epidemic.

“We wanted to figure out if clinicians valued academic detailing programs related to opioids,” she says. “Prescription drug monitoring programs have been shown to work, so we want to educate doctors on how to use the PDMP optimally and inform them about best practices in pain management.”

Qureshi and her team used geo-spatial mapping to determine patterns of opioid prescribing from 2010-2011 — the first time that such a technique was applied to study opioids in South Carolina. The findings indicate a relatively small percentage of providers, concentrated in a few counties (Charleston, Richland, Greenville, Barnwell and Aiken), who account for most opioid prescriptions. This group represents a potential target for physician education and engagement in handling pain management and appropriate use of opioids.

The initial study didn’t control for prescriptions written at pain management clinics, something that is being added in further research. The next step will use data from 2009 through 2015 to look for doctors who are prescribing well above average amounts of opioids.

“Addressing the opioid crisis is a complicated balancing act — while there is a push for education, prevention and enforcement to reverse the epidemic, physicians must also ensure that patients suffering from legitimate acute and chronic pain have access to appropriate opioid medications,” Qureshi says. “To that end, our long-term goal is to create a shared decision-making tool that would allow patients to share their goal and preferences with providers in order to facilitate more effective opioid prescribing practices.

“In 2014, the American Medical Association Opioid Task Force decided physicians needed to be better educated about effective and evidence-based opioid prescribing,” she says. “We’re trying to figure out now what these trends mean and where can we innovate.”

Here is some basic information about opioids from the Centers for Disease Control and Prevention: