Students and scholars will have a richer understanding of contemporary politics and culture thanks to Washington Post columnist Kathleen Parker.

The 2010 Pulitzer Prize winner who lives in Camden, South Carolina, and writes the nation’s most widely syndicated column, has given her personal archive to the University of South Carolina Libraries’ South Carolina Political Collections.

Parkers’ papers include columns and other writings, correspondence with newsmakers and journalists, fan mail and letters from critics. Once catalogued, the collection will be made available to students, scholars and the public for viewing and research next year. 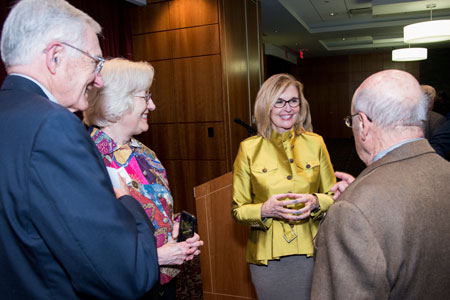 The personal archive of Pulitizer Prize-winning columnist Kathleen Parker will give students and scholars an in-depth look at U.S. contemporary politics and culture.

“The column is really the story of culture and politics during the past 30 years. This will become apparent once people start looking at them (her collection),” Parker says. “In the early years, I was hired to write about women and write about domestic issues. As my son grew, the column grew, and it became worldly as my son became worldly. It’s largely, in my cases, autobiographical. I don’t think it’s the final word on anything, but it is a personal record of life as I experienced it and observed it.”

Her collection of keen and insightful commentary joins the personal papers of dozens of prominent legislative and judicial leaders, journalists and grassroots activists. Those collections, archival materials and oral histories that comprise the South Carolina Political Collections are valuable resources in the study of contemporary government and society.

“Kathleen Parker’s papers represent a significant element in our effort to reflect our history and community,” says Herbert Hartsook, director of South Carolina Political Collections. “Her papers will fit well with those of other journalists we hold, including Jack Bass, Charles Wickenberg Jr. and William D. Workman Jr., as well as her Washington Post colleague, Pultizer Prize winner and university alumnus Jim Hoagland.”

Dorothy Walker with the South Carolina Political Collections can’t wait to see students dive into Parker’s treasure trove of the modern political landscape. She expects them to mine the papers by subject — an event, era, person or place — to enrich their primary research or to study Parker’s work process — her methods of interviewing, investigating and reporting and writing commentary.

“Her body of work is so broad and in-depth, there will be elements in her papers that will be of interest to a wide variety of researchers for generations to come,” Walker says.

“I know about Mrs. Parker’s work. She’s a big name in Washington, and I wanted to meet her,” Fries says. “I want to become a political commentator. I would love to study her papers and learn about how her work has changed over the years. For example, I’d like to see how has it changed according to who was in the White House or by what the predominant issues at the given time were. It would be really interesting.”

Parker, who describes her politics as “mostly right of center,” writes a twice-weekly column on politics and culture, which is syndicated in more than 400 U.S. media outlets.

Her career as a journalist began in South Carolina at the Charleston Evening Post. She went on to write for five major newspapers and an array of magazines including Time, Town & Country, The Weekly Standard, Fortune Small Business and Cosmopolitan. She wrote the book, “Save the Males: Why Men Matter, Why Women Should Care.”

In addition to her writing, Parker frequently provides television commentary. She co-hosted CNN’s Parker Spitzer with former New York Gov. Eliot Spitzer in 2010 and 2011 and appeared as a popular guest on NBC’s Meet the Press and MSNBC’s Hardball with Chris Matthews.

“Parker is among the country’s most thoughtful commentators on modern society,” Hartsook says. “Her work is of national interest and will appeal to the university’s students and faculty in history and political science as well as library and journalism in the College of Information and Communications.”