Master of His Field 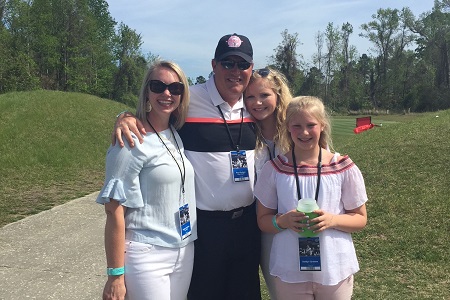 Paul Graham with his wife and daughters.

When Hootie & the Blowfish became the hottest band in the world, Paul Graham, a 1989 graduate of the University of South Carolina, was one of the people behind the scenes helping fans enjoy the music as the band’s tour manager. When the group launched Monday After the Masters, a celebrity pro-am golf tournament to raise money for charity, they called on Graham to serve as tournament director.

Those accomplishments and many others in a successful career led Graham in a direction he never anticipated — back to the University of South Carolina as an adjunct professor and graduate student.

"In 1989, if you said I’d get a master’s, I would have laughed. It’s a great feeling to surprise even myself,” Graham says.

That surprise began to take shape nine years ago when Tom Regan and Frank Roach, professors in the College of Hospitality, Retail and Sport Management, approached Graham about teaching sport and entertainment management classes.

Graham was a busy man, working with Empire Sports Management and building the company’s golf representation arm into a key part of the business. Still, he joined the university as an adjunct professor and found himself impressed by the department and its students.

"When I was in school, there was nothing like this offered,” he says. “The students are ready. They know what they want and they know the business.”

"In 1989, if you said I’d get a master’s, I would have laughed. It’s a great feeling to surprise even myself.” -Paul Graham

Graham came to love teaching and was encouraged by fellow faculty members to pursue his master’s degree in sport and entertainment management, in the same department where he taught undergraduates.

“I wanted to go through it truly as a student and it's been great," Graham says.

While teaching and managing his studies, his role with Empire Sports Management and his duties as a husband and father of two, Graham completed his master’s degree requirements in just two and a half years.

“It hasn't been easy.” Graham says. “The first class I took was Stats 600, and I had never taken statistics in my entire life.”

He persevered through the ups and downs, never asking for special treatment, and says he is grateful for the wide array of future opportunities a graduate degree will offer.

"I don't see myself not teaching in the future. The department is full of unbelievable people. I'm so fortunate to be alongside of them.”