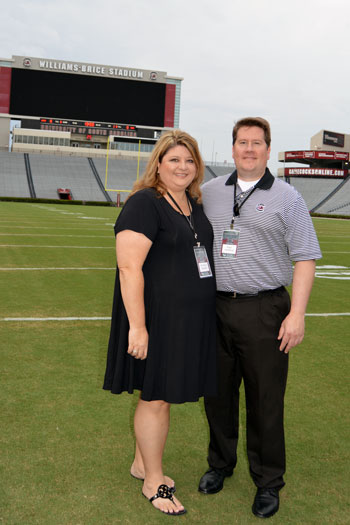 “The university created a strong foundation that paved the way for future success and we are most grateful to have the opportunity to include USC in our estate plan as a gift that signifies our appreciation and loyalty.” — Michele Braddock-Beagle and Paul Mefferd

Michele Braddock-Beagle and Paul Mefferd met in New Orleans when returning to college to attend the University of South Carolina was still just a dream for Braddock-Beagle.

“He told me how much he loved the Gamecocks and I told him I was thinking about applying to USC,” Braddock-Beagle says.

Though it would be a few more years before she and Paul Mefferd, ’98 biology, crossed paths again and though they never were on campus at the same time as students, the couple made USC a key part of their estate planning.

Braddock-Beagle’s daughter is also a Gamecock. Morgan Beagle graduated in 2017 with a journalism/mass communications degree and is currently working on her master’s in sport and entertainment management.

Mefferd, a physician in Atlanta, grew up in Pawleys Island and knew he wanted to go to Carolina very early, choosing USC over Duke, UNC, and Furman. Braddock-Beagle grew up in Mississippi and was living in North Dakota working as a banker before she decided to return to school, earning a BAIS degree in sport and entertainment management in 2007. She now is an event planner in Atlanta.

“As we were thinking about a giving plan, we realized the university is what gave us the ability to have these jobs that we love,” Braddock-Beagle says. “The university opened up so many doors and contacts for me.”

A big part of that for Braddock-Beagle was the late Harriet Hurt, who worked with later-in-life students returning to school to remake themselves.

“Harriet reminded me of my favorite quote often, ‘It’s never to late to be what you might have been,’ ” Braddock-Beagle says. “She was my support and my mentor.”

The entire family is in on the gift, which leaves a portion of their estate as well as the proceeds from a life insurance policy to the general scholarship fund for athletics.

“While attending the University of South Carolina we obtained wonderful educations, endless networking opportunities, lifelong relationships and an entire Gamecock family,” the couple says. “The university created a strong foundation that paved the way for future success and we are most grateful to have the opportunity to include USC in our estate plan as a gift that signifies our appreciation and loyalty.”

Topics: Alumni, Philanthropy, College of Arts and Sciences, College of Information and Communications