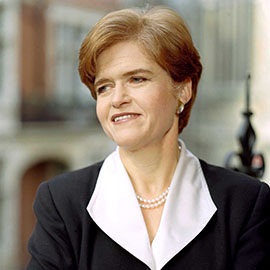 Deborah E. Lipstadt, professor at Emory University, served as a historical consultant to the United States Holocaust Memorial Museum. She will deliver the 2018 Solomon-Tenenbaum Lectureship in Jewish Studies.

The Solomon-Tenenbaum Lectureship in Jewish Studies is free and open to the public. A book signing will follow the talk.

Where: My Carolina Alumni Center

Deborah E. Lipstadt’s visit to Carolina comes at an important moment in the local and national conversation about how our society understands history and its ties to the present and future.

A scholar who won a famous legal battle over a Holocaust denier, Lipstadt will speak about modern anti-Semitism during the 2018 Solomon-Tenenbaum Lectureship in Jewish Studies on Jan. 28.

“Dr. Lipstadt will bring meaningful insight to our community during a time when public dialogue about race, religion and understanding are critical,” says Samuel Tenenbaum, who helped establish the Solomon-Tenenbaum Lectureship in Jewish Studies almost three decades ago.

Lipstadt, Dorot professor of modern Jewish history and Holocaust studies at Emory University, wrote “Denial: Holocaust History on Trial,” chronicling her 10-week trial in London after being sued for libel by David Irving for calling him a Holocaust denier. The judge ultimately ruled in favor of Lipstadt and found Irving to be a “neo-Nazi polemicist” who “perverts” history and engages in “racist” and “anti-Semitic” discourse.

The Daily Telegraph of London described the 2000 trial as having “done for the new century what the Nuremberg tribunals or the Eichmann trial did for earlier generations.”

Her book was adapted into the 2016 movie “Denial” featuring Rachel Weisz and Tom Wilkinson.

Lipstadt’s talk titled “Contemporary Anti-Semitism: An Enduring Form of Prejudice and Hatred,” will discuss the major issues involved in her lawsuit, link them to today’s racial discourse and explore how communities can address this growing societal concern.

Federica Clementi, director of the College of Arts and Sciences’ Jewish studies program and an English professor, teaches courses on the Holocaust. She says Lipstadt’s experiences offer a recent and concrete example for students to consider that further amplify concepts discussed in the classroom.

"It’s important for us to hear from someone who has experience as an intellectual, a teacher, a scholar and has experience rooted in a life event,” she says.

The Solomon-Tenenbaum Lectureship in Jewish Studies is presented annually to students, faculty and the community. The endowed lectureship is a signature event from the College of Arts and Science made possible by benefactors Melvin and Judith Solomon of Charleston, and Samuel and Inez Tenenbaum of Columbia, whose generosity created a Jewish studies endowment to support the lectureship, enhance the library collection and establish a chair of Jewish Studies.