Track and field star has high hopes for his senior season

Josh Awotunde tosses a 14-pound practice shot into the Carolina sky. It flies about 35 feet before landing with a resounding thud.

The senior thrower is just posing for a photo shoot; these tosses are barely a warmup for Awotunde. Still, each 4-inch-wide divot on the turf left by the shot is impressive to those unfamiliar with the sport. 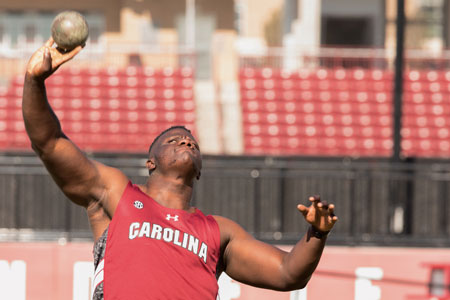 Awotunde, an exercise science major in the Arnold School of Public Health, isn’t looking to leave his mark at Carolina’s Sheila and Morris Cregger Track, though. Those divots will be repaired in no time. Awotunde wants to leave a lasting mark in the record books.

“Every year, he’s gotten better,” assistant track and field coach Mike Sergent said this past fall. “We’ve battled through a couple of injuries along the way, but this fall has been a great fall. He’s bigger and stronger than he ever has been, and we feel super enthusiastic about the upcoming season.”

Awotunde was a 225-pound quarterback in high school. His football coaches also coached the track team, and they thought he would be a good fit for the throwing events. On his first day out with the track team, Awotunde was throwing farther than anyone else and his track career began to take off.

By his senior year of high school, colleges had taken notice, and his high school coaches took a keen interest in getting him to a good university with a competitive track team. It didn’t take long for him to figure out where he wanted to be: “In the SEC,” he says. “And USC was a great fit. It was an easy choice. The coaches and the facilities are awesome, and it’s been a great experience.”

He has put on 50 pounds since high school and is now one of the best collegiate throwers in the nation. In 2016, Awotunde earned silver at the SEC Outdoor Track and Field Championships and finished seventh at the NCAA Outdoor National Championships. He is also a two-time All-American.

Awotunde hoped to add some more hardware to his collection last May when Carolina hosted the Southeastern Conference championship, but things didn’t go as planned. The New Jersey native competes at a high level in the discus, hammer and shot put events, but Awotunde pulled his hamstring the week of the championship and missed his chance to win the league title at home. He healed enough to compete in the NCAA Championships, but has his sights set higher than just doing well this year.

“Being injured for the NCAAs was tough,” he says, “but now I’m paying attention to everything to make sure I stay healthy: diet, my routine, my workouts, my mental approach, everything.”

“I want to win the national title, indoor and outdoor,” Awotunde says. And he wants to win the SEC indoor and outdoor titles along the way. “I’m going to do whatever it takes to make it happen. To be on the stand with the gold medal at NCAAs would be an unreal feeling.”