Will Sharp splits his time at the University of Chicago between treating traumas and broken bones in the emergency room and performing research on cardiac arrest and resuscitation science in the laboratory.

Sharp’s journey to his position as an emergency medicine physician and a researcher followed a somewhat nontraditional route. A native of Columbia, he earned an undergraduate degree in biology and history from Wofford College before earning his doctorate in biomedical science at the University of South Carolina School of Medicine. While a doctoral student at the medical school, he worked with faculty members on cardiac cell biology and taught classes such as gross anatomy and histology. After earning his Ph.D. from the school in 1994, he headed to a post-doctoral fellowship at the University of Illinois in Chicago. 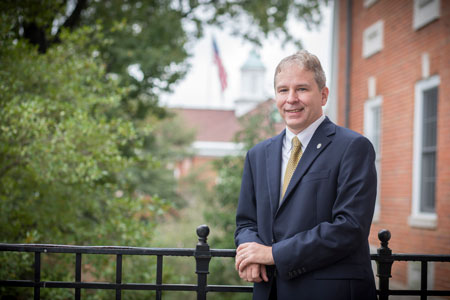 Will Sharp, who earned his M.D. and Ph.D. from Carolina, is an emergency room doctor and researcher at the University of Chicago.

While he liked research, he soon figured out he wanted to do clinical work, as well. “I wasn’t happy just being in the lab. I knew I wanted to see patients,” he says.

To achieve that goal, Sharp knew he would need to add an M.D. to his professional pedigree and returned to Columbia to become a medical student at the School of Medicine. He completed his medical degree in 2003 on the path to emergency medicine. Along the way, he also was awarded a one-year Rotarian Ambassadorial Fellowship to study gene therapy of cystic fibrosis at the University of Oxford in England. He completed his emergency medicine residency at the University of Michigan in 2007.

Now, as an assistant professor and researcher at the University of Chicago, he estimates he spends 60 percent of his time as an ER doctor, with the remaining hours spent in the lab, conducting research and writing papers and grant applications.

“I wanted to combine my clinical interest in emergency medicine with my basic training here in cardiovascular biology,” he says. “My primary interest is cardiogenic shock, or resuscitating patients who’ve had a sudden cardiac arrest — something we see on a daily basis in the emergency department.

“And because I have that basic science background, I can develop certain insights. I can translate it into my clinical practice, and it allows me to design research projects that address that issue.”

An National Institutes of Health ROI grant funds his research, which looks at mitochondrial dysfunction. Mitochondria are often called the powerhouses of the cell, and they help convert oxygen along with sugar, fat and protein from foods into usable energy. Following cardiac arrest, when there is a lack of blood and oxygen flowing to the heart, mitochondrial function suffers.

“We’re trying to generate new therapies or treatments to target this mitochondrial function to improve the heart function following resuscitation from cardiac arrest,” he says. “We think that will improve not only function of the heart but also the recovery of the brain following cardiac arrest and will lead to better patient outcomes.”

He has received young investigator awards from the American Heart Association Resuscitation Science Symposium and from the Society of Academic Emergency Medicine.

With a research specialty that focuses on the heart, many people have asked him why he didn’t pursue cardiology.

“Emergency medicine is what interested me clinically so that’s the direction I went,” Sharp says. “My training at USC gave me the background and foundation for what I needed for my future career.”