Lay of the land 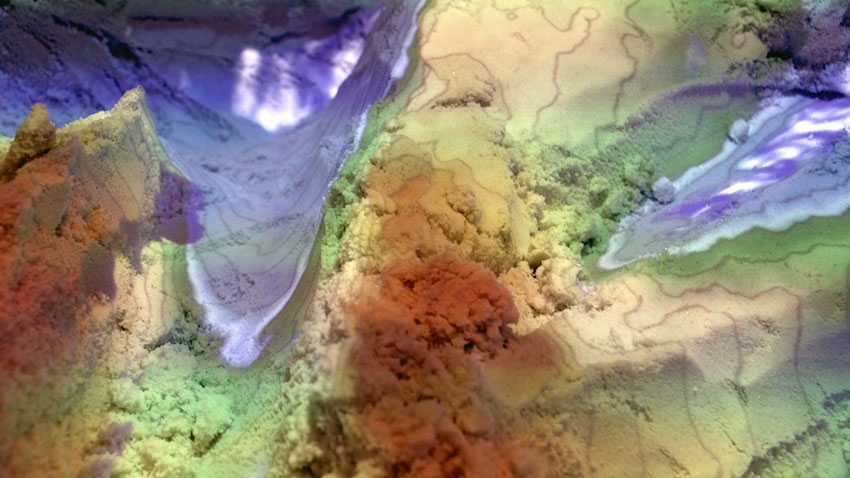 Students in Ray Torres’ earth surface processes course use their bare hands to build dams, scoop out river beds and mold mountain ridges. OK, it’s not as hard as it sounds — their earthmoving exercises happen in a sandbox the size of a small table.

Technically called an augmented-reality sandbox, the device uses a 3D camera and sophisticated software to project topographic lines and colors corresponding to elevation on the sand as it’s being shaped. Torres, a professor in earth and ocean sciences, uses the sandbox — the first of its kind on campus — as a hands-on tool to teach concepts such as topography and land surface processes that collectively create and destroy that topography.

“I can ask students to replicate the topography of South Carolina in the sandbox or build a mountain with tributaries flowing into a large river,” Torres says. “And in the instant they start shaping the sand, they see the topographic lines projected onto their work.”

Shades of red and orange for higher elevations and greens and blues for lower elevations project onto the sand between the topographic lines, mimicking the topographic maps students see in textbooks. The software can also be programmed to display different rates of precipitation and evaporation to simulate water circulation in modeled environments.

“The first time students look at topography on a page, they see colored spaghetti. There’s just no connection with a 3-D surface,” says Katherine Ryker, an assistant professor in earth and ocean sciences. “The AR sandbox can jump their understanding forward very quickly.”

Jeff Jefferson, an information technology specialist for the university’s Baruch Institute for Marine and Coastal Sciences, built the sandbox for a fraction of the retail price with off-the-shelf components and freeware developed by the University of California-Davis. The only glitch he faced was that it wouldn’t fit through the door after it was built. A simple design change turned the sandbox into a freewheeling teaching tool that now moves from lab to classroom with ease.

Funding for the device came from an internal technology grant, which Torres will tap to build three more sandboxes. “Soon we will have one with flowing water and one with a river emptying into a standing body of water to create a delta,” Torres says.

The plan is to use the sandboxes as teaching tools in several courses and potentially in future outreach programs to middle or high school students studying earth sciences. Torres also envisions placing an augmented-reality sandbox in a public place on campus to allow curious students to try it out and perhaps get a quick, hands-on and intuitive lesson on the shape of the world around them and how people influence it.