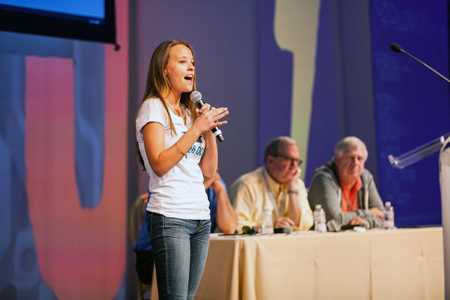 Jocelyn Paonita Pearson worked with the Proving Ground from its earliest days and pitched her own business idea during one competition.

We’ve all had those light bulb moments when the solution to a nagging problem presents itself while we are driving to work or taking a shower. We may even go so far as to craft a fix for our own particular situation, but most of us never think to patent, produce or package our product for the worldwide market.

For the past eight years, University of South Carolina students and recent grads have had the opportunity to do just that with the Proving Ground — a startup business pitch competition along the lines of ABC’s “Shark Tank” television program.

In its eighth year, the Proving Ground has awarded more than $250,000 in prizes, with many winners going on to successfully launch businesses and services.

While the details of the competition and the prize amounts have changed over the years, the one thing that hasn't changed is the program’s commitment to helping Carolina students and recent graduates find their entrepreneurial footing.

For the competition, students create a business plan and try to sell their idea to a panel of judges.

This year’s presentations are in the spring to give students more time to prepare, Kress says. Students can submit their business plans through Feb. 23 and will have access to LivePlan, Palo Alto Software's award-winning business plan software, at a reduced price.

“This year, we’re giving more time and support up front to ensure competitors have the best chance of winning the Proving Ground and ultimately, winning in the marketplace,” Kress says.

Plans go through three points-based judging rounds, culminating with a live pitch event on March 29. The team left standing in each category wins. Along the way, students discover whether their idea can actually work and can win thousands of dollars to help make it become a reality.

“I didn’t have an entrepreneurial bone in my body,” says Jocelyn Paonita Pearson of Charleston, who worked as a student government liaison to the Proving Ground in its first year. “The competition forces you to think through what this idea is. It’s one thing to have an idea, it’s another to go through the process of actually trying to start a business.”

Pearson, who graduated in 2013 with degrees in international business, finance and global supply chain management, now owns and operates her own business, the Scholarship System, which gives families and college students the tools they need to help pay for college and graduate — like she did — debt-free.

“People kept asking me how I did it and as I told them the process, it got very repetitive, so I decided to write a book, which I self-published on Amazon,” Pearson says. “When they start searching for scholarships, a lot of people get overwhelmed and quit. But when you have a step-by-step system, it’s easier.”

From there, she created a six-step online course.

“We did a soft launch and sold it to eight people,” she says. “That gave me the validation I needed to quit my job and do this full-time.”

Pearson’s current business is a far cry from the one she pitched when she competed in the Proving Ground. That was a program called PTtrax and was an app to let personal trainers keep track of all their clients’ progress on one handheld device, like an iPad.

“I think we were a little ahead of our time,” she says. “When we tried to pitch it, gyms said there was no way they would let their trainers carry an iPad. Now, try to find a trainer without one.”

The start of something wonderful 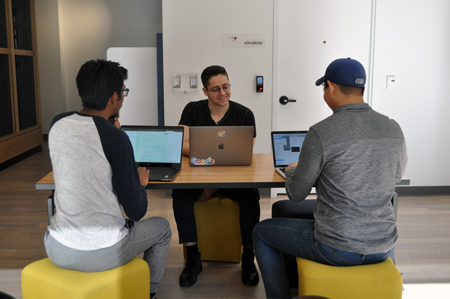 Rob Castellanos has started Syndio Health based on his winning business pitch in the 2016 Proving Ground competition.

For 2016 winner Rob Castellanos, the Proving Ground provided the validation, the financing and the push he needed to start his business, Syndio Health — a health information platform where people can discover and rate treatments, ask questions and learn how to manage their conditions.

The Bogota, Colombia, native came to USC in 2012 in part because of the McKissick Scholarship he won, but mostly because of the university’s top ranked international business program.

“I wanted to travel as part of my college experience,” says Castellanos, who studied abroad in four different countries, including South Africa where he went for a web-development boot camp after graduation in May 2016. He postponed a job with Google to get his fledgling company’s team in place, then asked his father to take over as interim CEO while he began his job at the technology giant.

After just a few months, he realized his dream was to be at his own business, so he left Google and went to work full time at Syndio Health.

When he initially envisioned it as a college student, he wanted to help people collect all their medical data in one location as they moved from doctor to doctor. His own experience and frustration trying to find the cause of intense back pain led him to the idea.

“I went five years dealing with the pain,” he says. “But the anxiety was worse. One doctor told me I might have spinal tumors — cancer. We spent tens of thousands of dollars with no real diagnosis.”

Castellanos finally discovered he has a form of arthritis, the symptoms of which he controls with a diet that helps reduce inflammation.

After he won the Proving Ground competition based on his original idea, Castellanos used the money to hire developers and tried to raise additional capital to finance the idea.

“We didn’t have a product. We raised zero dollars,” he says.

The idea of people being able to consolidate their medical records and carry them electronically wherever they went simply was not scalable with limited resources, he says. With federal privacy requirements, the security on his servers and the data contained there would have been cost-prohibitive.

“So we came up with another idea that could scale while still remaining aligned with the original mission,” he says. “One that provided immediate value to the user and that could enable network effects.”

In addition to giving patients a place to research their conditions, Syndio Health collaborates with medical professionals for original content, expert opinions and treatment evaluation. He is planning to launch the platform in March and is starting with the condition fibromyalgia, but plans to add more this year. The company is already working with more than 50 patients.

“It’s a platform to help patients help patients,” he says. “Our mission didn’t change, but our product changed. You can’t get married to one product. If the product doesn’t work, you need to be able to change your direction while remaining true to your original purpose — ours being to empower people’s health through connection.” 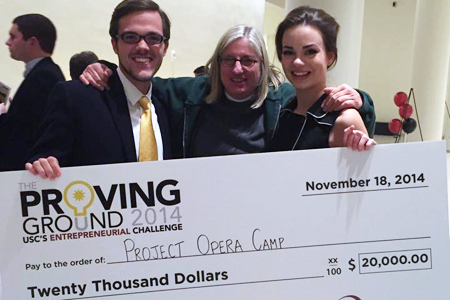 Kate McKinney used her winnings in the Proving Ground competition to put on an Opera Camp for Columbia-area students.

The Proving Ground also has been a great place for folks to test ideas, even if they are not looking to start a full-time business.

Kate McKinney, a native of Lakewood, Colorado, had been mulling an idea for years about how to introduce opera to children in Columbia. The music performance major was talking to one of her professors about the idea when he suggested she make a pitch to the Proving Ground.

“I had 48 hours until the deadline,” she says. “I pulled two all-nighters to get the business plan submitted.”

Then the real work began.

“It was one thing to write it down,” she says. “But it was another to take what you wrote on paper and figure out how to present it to a panel of judges.

“It was a completely different world to try to sell it to someone.”

After winning in the social impact category, McKinney and her partner in the competition used the prize money and raised some more funds to host a free two-week opera camp in Columbia with 15 participants.

“That was the challenge,” she says. “We wanted it to be free for the participants. The goal was to reach kids who may not have been exposed to opera, who may be in schools without those kinds of resources.”

At the end of the camp, the students put on a performance that they had worked on during the two weeks.

“We also coupled some life skills classes, like budgeting and wellness, with learning the music and putting on the show,” McKinney says.

McKinney, who works in public relations for the San Francisco Symphony, says the camp would have been a full-time job — without much pay — if she tried to do it every year. But she still carries the lessons she learned from it and the Proving Ground.

“We all know there is intrinsic value to art, but you have to sell that to people,” she says. “You have to have a business model — something that is practical while considering the intricacies of the nonprofit industry.” 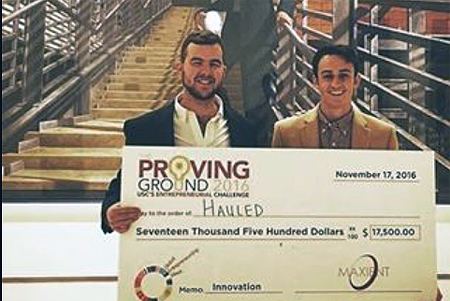 Senior economics major Ryan Barkley traces his entrepreneurial roots to his days as a grade-schooler living in Massachusetts when he would cull his neighbors’ recycling bins, looking for cans that would earn him 5 cents each in returned deposits.

Much later, when he and friend Jeb Roberts found themselves on breaks in college, they borrowed a pickup truck and a trailer and used it to haul away junk for customers. Some goes to landfills, but the pair also looks for items that can be sold or donated to Goodwill or other charities.

“We’ve been hauling junk for two years now on breaks and weekends,” Barkley says. “The more jobs we do, the more we learn about what our customers want.”

Eventually, the pair were able to afford their own trucks and trailers and had so many customers, they couldn’t serve them all.

“We couldn’t meet demand, so we started referring friends with trucks,” Barkley says. “So we started to think ‘How can we do that on a larger scale?’ ”

Their concept, Hauled, won last year’s competition. Their business is a web application that connects folks needing junk hauled away with folks who are willing to do the hauling. Think Uber for junk removal.

“We’ve studied Airbnb and Uber and we’re looking at what does the process look like before the transaction,” Barkley says. “That’s where we add the value — and that’s what I’m passionate about in the long run is creating that value.”

The win was Barkley’s third try in the Proving Ground. His first two efforts didn’t get to the round where judges review the business plans from top to bottom.

“The big thing with the Proving Ground is you have to show what the problem is, not just your solution,” he says.

The Proving Ground has grown steadily over its brief history, going from less than 25 entrants, all from the Columbia campus of USC, in 2010, to over 60 entrants in 2016, including entrants from other campuses in the USC system. The competition has also expanded the category option from one category to three: the Maxient Innovation category, the Avenir Discovery category, and the SCRA Fan Favorite Category.

While organized by the Darla Moore School of Business’ Faber Entrepreneurship Center, the competition is open to students in all majors. To help competitors have the best chance of winning, registrants are given access to LivePlan, a cloud-based business plan software, and support from the Small Business Development Center.

Here’s the breakdown on prizes and categories for the 2018 competition: