2018 Outstanding Woman of the Year 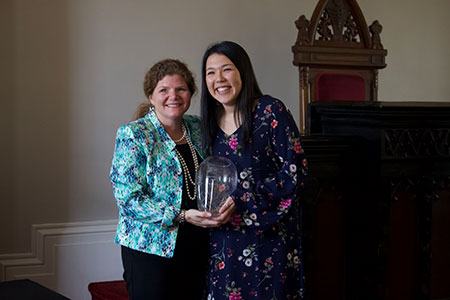 Kim McMahon, director of Campus Life and the Russell House University Union, (left) presented Rebecca Kaze with the 2018 Outstanding Woman of the Year award at a ceremony on March 28.

Rebecca Kaze spent her time at the University of South Carolina serving the Carolina community. On Wednesday, March 28, the public health senior was named the university’s 2018 Outstanding Woman of the Year.

Kaze, from Rockville, Maryland, will graduate in December 2018. She served as Carolina Productions president, an orientation team leader, a resident mentor, president of the Public Health Society, Carolina Judicial Council and as a Russell House student employee. While she loved each of these leadership roles in their own way, none of them are her favorite.

“My favorite leadership position is being a big sister,” she said, as her little brother ran up to her. “I know I wouldn’t have gotten where I am now without my mentors, many of them women.”

After graduation, Kaze plans to attend graduate school to pursue a master’s degree in student affairs. During her time at Carolina, Kaze discovered she is most passionate about projects with a big picture focus where she can consider communities as a whole, rather than individuals.

“This awards represents so much more than me,” Kaze said. “There are so many people doing amazing things in their little corners of the world. There’s so much going on in and outside of Columbia.”

Kaze and the other finalists have all made an impact here at Carolina.

Laura Billington, a social work student from Bluffton, South Carolina, dedicated her time toward the prevention of sexual assault and violence, working directly with the office of Sexual Assault Violence Intervention and Prevention.

Janelys Villata, a journalism and mass communications student from Beaufort, South Carolina, is the current president of the Latin American Student Association, a diversity peer educator and an opportunity scholars mentor.

Abbey Witt, a biological sciences student from St. Louis, Missouri, was committed to development in health sciences through medical missions, working as a nurse’s volunteer, and was involved with Timmy Global Health and Alpha Epsilon Delta pre-health fraternity.

“I know I wouldn’t have gotten where I am now without my mentors, many of them women.”

The Outstanding Woman of the Year award honors female juniors and seniors who have made an impact both on and off campus. The review committee takes nominations and applications and then determine finalists to interview. They look for excellence in one or more of the following: academic achievement and awards, campus involvement, community involvement or service, athletic activities, performing arts, campus media, work or internship experiences and contributions and impact to the university and to other women. The award is sponsored by the Department of Student Life.