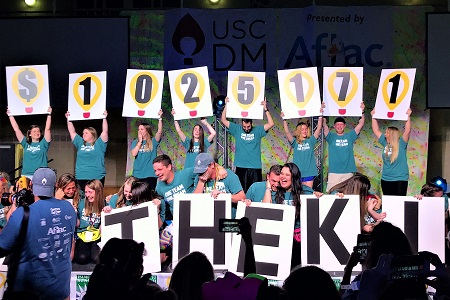 University of South Carolina Dance Marathon has grown to be the largest student-run philanthropic organization at Carolina and celebrated its 20th anniversary March 3. Returning alumni from the early days might barely recognize the 2018 Main Event at Strom Thurmond Wellness and Fitness Center, but since 1998, the goal has never changed: Everything is for the kids.

The 2018 goal was a big one: $1 million for the Child Life Department at Palmetto Health Children’s Hospital. Last year’s total of $703,289 was the most ever raised by USC Dance Marathon. Working to raise almost $300,000 more is quite a step, but one the students eagerly chose to take, and they made it with room to spare, raising $1,025,171.

"Our mentality has never been to be scared of the number,” says Cal Nugent, a senior and this year’s director of membership development. "We think this is a big building year for us, and though $1 million is a challenge, it's one we can absolutely handle."

USC Dance Marathon had raised more than $3.6 million in its first 19 years, and was recognized by the state Senate on March 1 with a resolution honoring the passion and commitment the organization's members have shown to the children of South Carolina.

The Dance Marathon name might sound like one-time event, but a staff of nearly 200 student volunteers work year-round not only to raise money, but also to make connections with the children and families they are working to help.

The children who have had to spend time in the hospital are known as Miracle Kids, and Dance Marathon works to make a positive impact in their lives in ways that go beyond money. In just one of many examples of the bonds that are built, when alumni Katelyn Daley and Austin Brown married last year, they chose Miracle Kid Lila Mozingo to be their flower girl.

"Our alumni are incredible. It's amazing that some of them who were there for the first year are still reaching out and still want to be a part of this, still feel like this is their family,” Nugent says. “I know in 20 years I'm probably going to feel the same way and still support it the same way. Once you're in Dance Marathon, you feel like you're part of it forever."

Cal Nugent is a senior hospitality management major and this year’s director of membership development for Dance Marathon.

Many of those Dance Marathon alumni returned for the 20th annual Main Event, joining the Dance Marathon staff and a record-setting 2,000-plus students who registered to raise money and join in the 14-hour marathon. Also on hand were be many Miracle Kids and their families.

Nugent, a hospitality management major, has found himself putting skills acquired from his classes to work as he helps plan the Main Event.

"It's helped me with the management side of things: managing my time, scheduling, getting everything in order,” he says. "Hospitality is great as a major because it's so hands-on, which has helped me find a passion in event planning.”

USC Dance Marathon receives support from the university, but the students run the show in every detail. Saturday, a year of hard work culminated just before midnight, when the fundraising total was revealed after 14 hours of dancing and a final gigantic push to hit $1 million.

"That last hour you just want to cry because it's so amazing,” Nugent says. "There are some really, truly incredible people in Dance Marathon. You find wonderful people that you didn't even think would exist in the world."

People who want to help the cause can donate online in the name of a particular team member (past or present) or of a Miracle Kid or family. 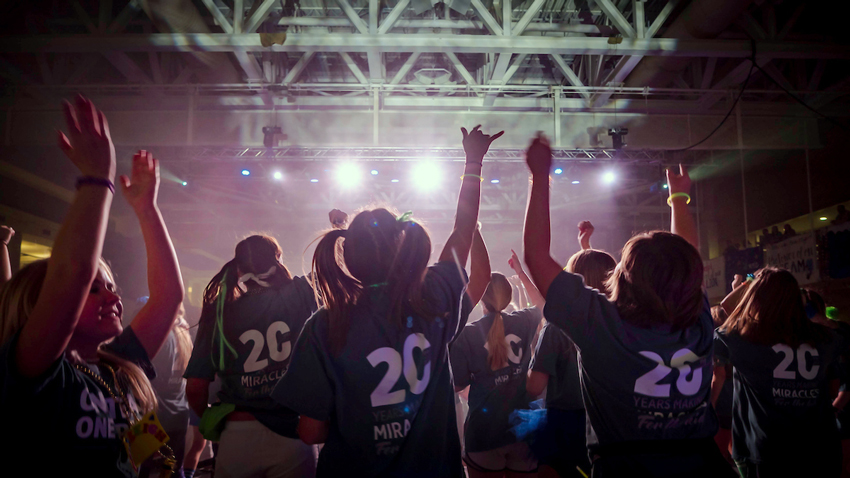