Fighting for the fragile 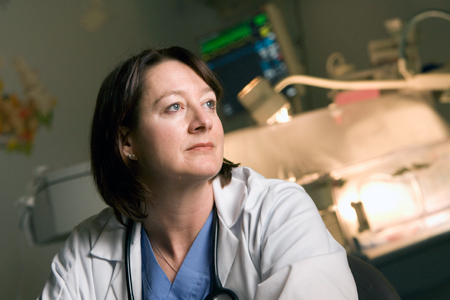 The tiny baby’s odds of survival were poor from the start.

Born 14 weeks premature in a small rural hospital, the infant seemed stable to Robin Dail and the neonatal intensive care unit team that touched down by helicopter to transport him to a larger hospital. Although the delivery team was not specially trained to handle such a fragile baby, the staff had followed recommended protocols, placing him on a ventilator to aid his breathing and giving him medication drips to help his underdeveloped organs function outside his mother’s protective womb.

But when Dail, then working in a hospital as a neonatal nurse practitioner, picked up the baby, his delicate papery skin was ice cold.

Amid the whirlwind of interventions to save the infant’s life, the staff had overlooked one critical vital sign: temperature. The NICU transport team warmed the hypothermic baby and rushed him back to the academic medical center for care, but expert interventions couldn’t save him.

Two weeks later, the baby died. The experience sparked Dail’s determination to prevent another baby from the same plight. Her mission was born.

Dail, associate dean for faculty affairs at the College of Nursing, has dedicated her research career to understanding the impact of temperature on premature babies, particularly those extremely fragile infants born at less than 32 weeks gestation or at less than 3.3 pounds. She came to the University of South Carolina in July from Duke University where she served for a decade as a decorated member of the nursing faculty and was chosen as a Robert Wood Johnson Foundation nurse faculty scholar and an Amy V. Cockcroft leadership fellow, among other honors.

I love the College of Nursing. The collaboration here is fantastic.

Robin Dail, associate dean for faculty affairs at the College of Nursing

At Carolina, Dail is designing studies and technologies to advance premature infant health outcomes, and her work is influencing practice standards for nurses and physicians. Beyond her own extensive research portfolio, she is mentoring faculty and graduate students to develop nurse scholars who can address complex health challenges.

“Robin Dail’s innovative and impactful research is vital to improving outcomes among premature infants and is especially needed in South Carolina,” says Jeannette Andrews, dean of the College of Nursing. “She has been an outstanding addition to our faculty and a great asset to students who have clinical and research interests in neonatal health.” 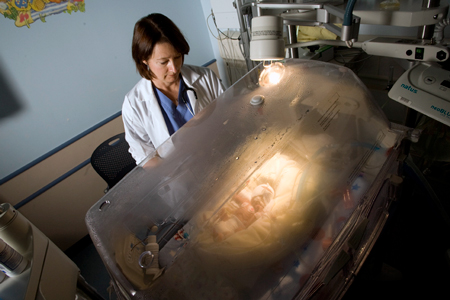 Each year, more than 63,000 extremely premature babies are born in the U.S., and they face elevated risks of developmental delays and health complications, some of which can lead to death. According to the March of Dimes, 2 percent of babies born in South Carolina in 2016 were classified as very preterm, and the state’s overall preterm birth rate was 11.2 percent, one of the highest rates nationally.

Very premature infants face a number of obstacles because of their abridged in utero development. Notably, they cannot regulate their own body temperature.

As Dail explains, these infants mimic the temperature-adaptive properties of reptiles. “If you were to take a premature infant and put it on the table, it automatically will drop its temperature down to the temperature that it’s laying on and the surrounding air temperature, which is why they get so cold,” she says.

And although delivery room interventions help extremely premature babies retain heat after birth, often their temperatures have fallen by the time they arrive at the NICU. Their temperatures may drop again each time they are removed from the controlled incubator environment or the portholes are opened, Dail says.

Hypothermia taxes the infants’ underdeveloped organs and can cause other serious complications, such as respiratory problems, infections with lasting consequences and irreversible developmental delays, she says.

When Dail began searching for solutions to prevent thermal loss in premature infants, she came across a small Canadian study in which premature babies were immediately wrapped up to their necks in plastic bags after birth, creating a warm, moist cocoon.

Inspired to test the intervention herself, Dail, still working as a hospital-based nurse practitioner, designed a 100-baby study that explored whether the bagging intervention was more effective for infant temperature control than standard care and found that babies who were bagged avoided hypothermia.

Robin Dail’s innovative and impactful research is vital to improving outcomes among premature infants and is especially needed in South Carolina.

Jeannette Andrews, dean of the College of Nursing

As a graduate student, Dail validated those findings with additional research and found that increasing the delivery room temperature in combination with bagging was the most effective way to help low birth-weight babies maintain their temperature. Along with other experts, she successfully lobbied the American Academy of Pediatrics to change its delivery protocols for extremely premature infants to include bagging. Those recommendations were adopted in 2005.

During her doctoral studies at the University of North Carolina at Chapel Hill, she conducted a research study that collected minute-by-minute temperature data for 10 babies for the first 12 hours of life, gathering more than 720 data points per patient.

To gauge their response to hypothermia, she measured their temperature in two places: their abdomen, the standard site where temperature is checked, and their foot. Dail knew from the literature that foot temperature should be decreased in hypothermic infants in an effort to keep their core body warmer.

“What the data said to me was wow, maybe you can follow those two-point temperatures and actually predict when the baby might be infected so that we can act sooner and prevent the baby from getting so sick by putting them on antibiotics,” she says.

Dail is writing a grant proposal for a larger study that would record dual temperature data from more than 500 infants at five hospitals in North Carolina and South Carolina, including Palmetto Health Richland and the Medical University of South Carolina. Her hope is that research will ultimately lead to widespread adoption of dual-temperature monitoring as standard practice, triggering clinicians to more quickly identify and treat infections and reducing infection-related complications.

Since discovering this association between temperature differential and infection, Dail has also been searching for opportunities to develop technology that would facilitate dual temperature data collection for nurses and physicians.

In addition, she’s partnering with professor Abdel-Moez E. Bayoumi in the College of Engineering and Computing and clinical assistant professor Dirk Brown at the McNair Institute for Entrepreneurship to develop other commercial products that would help physicians and nurses monitor dual temperatures, a dream that languished for more than a decade but that has quickly blossomed at Carolina thanks to the collaborative faculty environment.

“This is my pie-in-the-sky job,” Dail says. “I love the College of Nursing. The collaboration here is fantastic.”