A day of giving

April 18 is Give 4 Garnet Day at Carolina

To say that Lou Kennedy is passionate about things she believes in doesn’t go far enough. The pharmaceutical industry CEO can get downright giddy when it comes to her alma mater, the University of South Carolina. 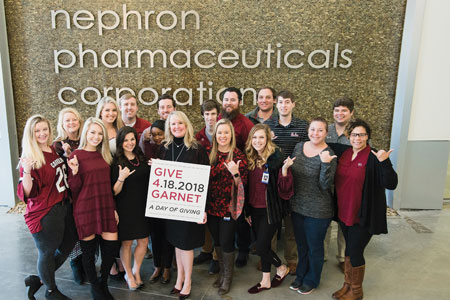 Lou Kennedy, a 1984 Carolina graduate and president/CEO of Nephron Pharmaceuticals, led a pre-Give 4 Garnet rally with some of her company's Carolina alumni.

That’s why her enthusiasm for April 18 is so palpable. That’s the date for Give 4 Garnet, an 18-hour-one-minute-long campaign to raise $3 million for various projects at the university.

"We’ve had really big capital campaigns in the past, and those are important, of course, but this one-day event is a great way to rally support in a very compact length of time and to introduce the idea of philanthropy to younger donors,” says Kennedy, chair of Give 4 Garnet and a 1984 graduate of the School of Journalism and Mass Communications and president/CEO of Nephron Pharmaceuticals.

Give 4 Garnet officially begins at 5:59 a.m. on April 18 and concludes at midnight, exactly 18 hours and one minute later, which corresponds to the university’s 1801 charter date. Students, alumni and friends of the university will be able to choose from a web-based menu of projects to support at give4garnet.sc.edu. Student scholarships, laboratory improvements, athletics projects, study abroad and undergraduate research are a few of the many possibilities earmarked for support.

The website, give4garnet.sc.edu, includes a number of short stories and videos explaining the rationale for each project. Updates on the progress of the campaign will be posted on the site throughout the day. Donors can also give before April 18 and have their gifts counted as part of the campaign by visiting Give 4 Garnet.

“I’m planning to earmark my gift that day for the Carolina Command Center, a social media monitoring and analytics classroom in the College of Information and Communications,” Kennedy says. “We’re asking larger donors to participate, but we can also teach younger folks how small donations can add up to create a transformative gift. That’s why I really jumped on this idea of a single day of giving.”

Young alumni, perhaps juggling student loan debt and other financial responsibilities, typically shy away from university fundraising campaigns, Kennedy says. But the Give 4 Garnet Day is all about participation and the power of multiplication, she adds.

“Small gifts, multiplied by many givers, really do make an impact,” she says. “Nothing feels better than giving, especially when you see the fruits of your labor. That’s what Give 4 Garnet is all about.”