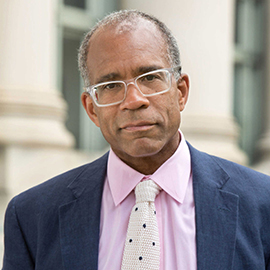 Randall Kennedy, professor at Harvard Law School, is a Columbia, South Carolina native and clerked for Supreme Court Justice Thurgood Marshall. His visit is part of a two-day symposium presented by the College of Arts and Sciences History Center and Historic Columbia.

The opening keynote address of Reconstruction’s Legacy: The History and Contemporary Significance of the 14th Amendment is free and open to the public.

When: 6 p.m., April 19 for keynote address
Where: Chappell Auditorium at Allen University
More information: The symposium continues April 20 at the S.C. State Museum, and this day’s events are $40 per person. Registration information for Friday’s sessions are available on Historic Columbia’s Reconstruction page.

Harvard Law professor Randall Kennedy, a Columbia native who is one of the nation’s top experts on civil rights and civil liberties, plans to change that in his keynote address at the upcoming symposium presented by the University of South Carolina’s History Center and Historic Columbia.

Titled “Reconstruction’s Legacy: The History and Contemporary Significance of the 14th Amendment,” the symposium will be April 19 and 20 at Chappelle Auditorium and the South Carolina State Museum. It is the continuation of a series of public events over the past two years marking the 150th anniversary of the Reconstruction era.

Kennedy will discuss three South Carolina cases key in defining 14th Amendment rights in the civil rights movement and beyond. The first, Briggs v. Elliott, should be as much a household name as the landmark school segregation case Brown v. Board of Education, he says. It was one of five Brown cases heard by the Supreme Court in 1952. Briggs, which originated in Clarendon County, was filed first and comes first alphabetically in the list of combined cases that make up Brown v. Board of Education.

The Supreme Court preferred the lead case to come from a state bordering the South, and not from the deep South, says Kennedy. Brown was a Kansas case, and the others came from Virginia, Delaware and Washington, D.C.

Though the symposium showcases historical context, the overall theme is critical to dialogue about the present and future.

“We’re not simply learning history,” Kennedy says. “We’re making history as part of this ongoing discussion. It’s not like the 14th Amendment is done with. This symposium is not going to be a spectator sport. You’re going to come and learn, and by learning you are part of an ongoing project.”

The symposium will continue April 20 at the South Carolina State Museum where Pulitzer Prize-winning author and historian David Levering Lewis will deliver a keynote address at a luncheon. Lewis, a history professor at New York University, was recognized with the top writing honor for his two-volume biography of W.E.B. Du Bois.

The day’s events also include a morning panel session focusing on the relationship of the 14th Amendment to the African-American struggle for civil rights, and the afternoon discussion will consider the significance of the amendment to the right to legal equality, without regard to sex, gender, physical ability and other categories previously beyond the reach of a constitutional guarantee.

“The 14th Amendment was the cornerstone of Reconstruction, became the foundation of the civil rights movement and has been central to the expansion of full constitutional rights and protections for all American citizens,” says Patricia Sullivan, history professor and director of the History Center. “Our event provides an opportunity for dialogue on how this history informs current debates around topics such as policing and the rights of the criminally accused, reproductive rights, issues concerning gender and sexuality, and immigration and birthright citizenship.”