It was back-to-school night and teacher Kari Croft was sitting on a curb, just a few feet from one of her students. He was sitting in the back seat of a police car, in handcuffs. The student had spent his teen years bouncing around in group homes, moving from school to school. At 17, he had barely enough credits to qualify as a ninth-grader. He was smart, gifted in math and had excellent communication skills. But now he was facing jail for getting in a fight with a student from another school.

This incident happened while Croft was working to create a new school model, and it was a reminder of countless times she felt frustrated as a teacher in Los Angeles, where many of her students were homeless or living in foster care or group homes. She saw a system not working for students who would miss too many school days because of circumstances they couldn’t control; living out of cars or working long hours at jobs to help support their families.

She saw students who were abandoned, who had fragmented transcripts from multiple schools, who had spent time behind bars. She also saw students who were excited when they got to school and wanted to catch up, but a traditional school system too often didn’t allow for that. One of her students had taken five semesters of algebra at five different schools, and still hadn’t earned one credit.

“I didn’t feel like the system was set up to let me do my job,” says Croft, who earned her degree from the University of South Carolina in 2009. “I loved my content area. I wanted to support kids’ goals, but I wasn’t able to do my job well. It made me angry. It made the kids angry. 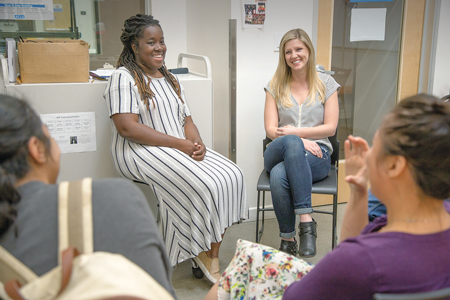 Carolina alumna Kari Croft is the founder and principal of RISE High, a charter school in Los Angeles. Croft was awarded a $10 million grant to start the school.

“And seeing it happen over and over, it made me frustrated. I loved my students and felt privileged to work with them to create something better.”

That search for “something better” sent Croft back east to teach in South Carolina for a year, then to earn a master’s degree from the Harvard Graduate School of Education. She returned to Los Angeles where she began to develop a program through a fellowship with Da Vinci Schools.

All of this prepared her for RISE High, a public charter school she founded that partners with social service agencies to serve students who are homeless, in foster care, on probation or facing other challenges that make it difficult to attend traditional schools. RISE was one of 10 school projects chosen to receive $10 million grants from XQ: The Super School Project.

Funded by Laurene Powell Jobs, the widow of Apple founder Steve Jobs, the campaign called on educators to design new high school models using technology, community partnerships and innovative learning methods to prepare students for the next century. Croft envisioned RISE, with the support of the XQ design team and assistant principal Erin Whalen, as a school that doesn’t just tweak the traditional model but transforms it.

The key to creating something truly different, Croft realized, was listening to students — their stories, their needs and their dreams. She learned they had amazing coping skills and a desire to succeed, but those dreams were held back by traditional school requirements. RISE High’s curriculum is project-based, making students learn skills and work to solve real-world problems with help from teachers and other students. They also can earn credit through jobs and internships.

“Adults go in and run a school or classroom based on what they think is best rather than what students need to succeed,” she says. “We asked students, ‘What’s going on with you? How do you learn? What do you struggle with and why?’ This type of school is never going to function unless we build it around needs and interests of students.”

After a one-year pilot program developing the school and educating a handful of students, RISE opened in fall 2017. About 100 students attend classes via a hybrid model that allows them to access their curriculum both in-person and online, all on flexible schedules that look at each student’s situation and chart a course to meet individual needs.

That includes everything from providing transportation to furnishing washers and dryers that homeless students can use at school. The school staff collaborates closely with social services providers, the mental health team and other student supporters such as education liaisons, probation officers and case managers who find services to support students.

Croft and her staff work with students like Heaven, a 17-year-old who lives in a group home with her infant son. Heaven, who takes her classes online, said going to RISE changed her life.

“I was in and out of school before I went to RISE,” she says. “It was hard for me to maintain my actual schedule and attendance. I was tardy a lot. At RISE, it’s more flexible. I can go to the site when I need to. And it feels completely different from the other schools. It feels more like a family. Everybody is willing to understand and hear you out. And the teachers give you their phone number. You can call if have trouble with your work. At RISE, you can call and say, ‘Hey, I don’t understand this. Could you walk me through this?’ The staff is young and very understanding.”

These kids push our assumptions. There are so many things we don’t see or don’t understand. They teach us to be better people.

Heaven plans to graduate next year, with hopes to become a lawyer.

The seeds for Croft’s interest in education and public service were sown early. She grew up in Saluda, South Carolina, the daughter of a school counselor and a probation officer with the Department of Juvenile Justice.

“In South Carolina, I saw lot of disparities based on where you grew up. I grew up in a small, rural district,” she says. “I had some great teachers but saw disparate outcomes among my classmates. I couldn’t make sense of that until I was in college and learned language to describe it.”

Croft earned her bachelor’s degree in English with a minor in Spanish, knowing she eventually would pursue a career in education. While at Carolina, she studied abroad in Costa Rica.

“I think that study abroad trip started to push me to think outside of South Carolina. Growing up in South Carolina and going to USC shaped who I was,” she says. “That time (in Costa Rica) was the time in my life that pushed and challenged me the most.”

She applied to Teach for America in Los Angeles because she wanted to use her Spanish language skills. “When I got here, I fell in love with the place. It’s so diverse. It’s enormous, with all these pockets and neighborhoods with their own culture. I was really able to blossom and grow being here. Now this feels like home.”

And every day in her new home brings a surprise, she says, as she watches students grow, thrive and challenge stereotypes.

She tells the story of a student who was working at a hotel from 4 a.m. until 2 p.m., then walking to school. He eventually stopped showing up.

“I was frustrated,” Croft says. “I told him, ‘You said you were committed.’ He was frustrated with me.” Then he showed up in a car. “He said, ‘This is why I’ve been missing school. I’ve been working longer hours so I could get a car so I could get myself to school. I’m as committed as ever, but this is a necessary step that you can’t see because you haven’t been in the situation.’

"These kids push our assumptions. There are so many things we don’t see or don’t understand. They teach us to be better people.”