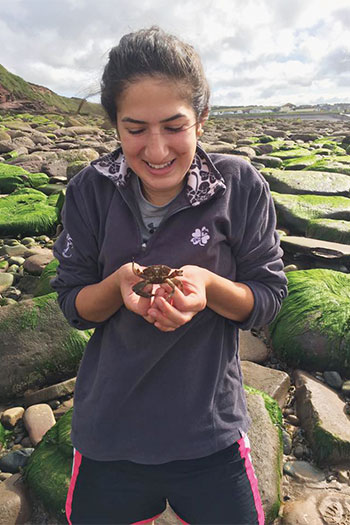 I grew up in the western suburbs of Chicago, far from the ocean, but I always had a love for the ocean and the animals that lived there. I lived near the Brookfield Zoo so we’d go there fairly often. I think that developed my interest in marine science.

They had an exhibit devoted to coastal species, and they had a dolphin exhibit. Those were always my two favorites. In high school, I ended up doing a program that was partnered with the zoo. From there, I decided I wanted to do something in marine biology and I looked at schools, mostly on the East Coast.

My freshman year, I went to a workshop through the Office of Undergraduate Research. That taught me how to reach out to potential research mentors. The first professor I emailed asked me to come talk to him. That was Jerry Hilbish, who I’ve spent the last three years working with. I’ve gotten so much out of the research. I was able to present at multiple conferences, which is really beneficial for anyone who wants a career in research. Since then, I’ve been able to use my experience in that lab to show how well I’d fit in with other programs or scholarships.

I also got to go to the United Kingdom for a summer and do field research with Dr. Hilbish and one of his graduate students. Those two months were spent traveling between Scotland, Wales and England collecting image samples of settled barnacles in the rocky intertidal. The images were going to be analyzed to understand how settlement competition between two species of barnacle changes over a latitudinal range.

I’ve been accepted into the Ph.D. program at the University of Rhode Island in their biology department, but I’ll be doing research with marine systems. Right now, I’d say I want to go into research more than academia, but that’s just because I haven’t had too much experience teaching, so I’m hoping to do a teaching assistantship during my Ph.D. to see if I like it. If so, I’ll probably pursue teaching.

The e-portfolio for Graduation with Leadership Distinction helped me summarize my whole research experience as an undergrad, which was great when I was applying for graduate school. It was a great time to reflect on everything I’ve done, and I was able to repeat that reflection in my grad school applications. It also helped me remember why I got interested in research.

Amy Zyck begins the doctoral program in biology at the University of Rhode Island this fall.