Watching a visually impaired child confidently run or hop on one foot is more than rewarding for Ali Brian, a physical education researcher in the College of Education. “It brings tears to your eyes,” she says.

Brian helps young children and adolescents with and without disabilities improve their gross motor skills — their ability to run, jump, hop, throw, catch and bounce a ball. The common belief that kids naturally acquire those motor skills is more myth than fact, according to Brian’s research. 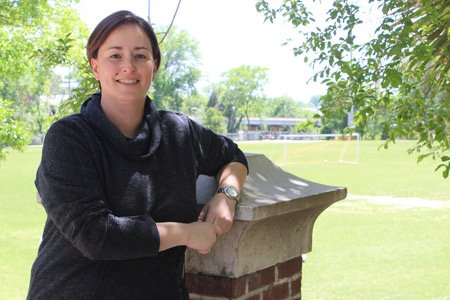 Ali Brian's research looks at ways to improve the gross motor skills of children and adoloscents with and without disabilities.

Two of her recent publications have shown that almost 80 percent of the preschool children tested — whether in Ohio, Louisiana or South Carolina — are exhibiting developmental delays with these skills. But after six weeks of twice weekly motor skills interventions guided by a specialist, only 5 percent of the same children showed delays.

“Nobody knows for sure why they are delayed, but it’s my hypothesis they’re not receiving any structured movement program in preschool with a specialist,” Brian says. “They only receive recess.”

There typically aren’t physical education teachers in preschools, and classroom teachers often don’t know the best ways to teach children gross motor skills. “The end game is to not only teach the teachers how to teach, but to help them conduct a motor skills intervention with me at their side,” Brian says.

While her early work focused on Head Start and rural Title One preschools, she now also looks at children with and without disabilities, particularly students who are blind or visually impaired. Her work has found that students will disabilities learn gross motor skills at the same rate as students without disabilities. All students start out delayed, but see parallel growth in six to eight weeks when intervention strategies are applied.

Visually impaired students are more likely than their peers to be sedentary, overweight or obese. Since it’s a low-incidence disability, there is only a small amount of data, and the numbers suggest children lag far behind in gross motor skill development.

Although visually impaired students are farther behind at the start, they moved from the fifth percentile to around the thirtieth percentile after a six-week intervention. Her next project will look at ways to assess gross motor skills of children with autism and develop interventions to improve their skills.

“To see the change, it’s powerful,” Brian says. “You think, ‘I can make a difference in their life.’”