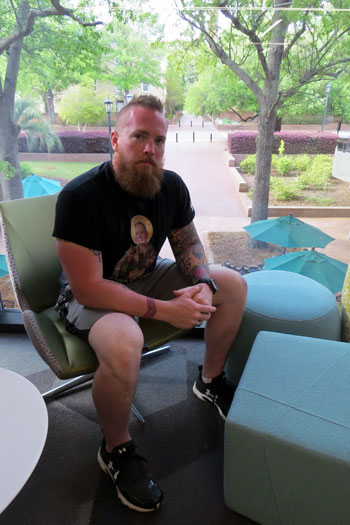 “I’m really excited, relieved, ready, proud and sad all at the same time. Part of me doesn’t want this to end. At the same time, I’m ready to reach the milestone and hang it on my wall." — Brooks Herring

While he was an undergraduate, Brooks Herring worked tirelessly to improve the student veteran experience at the University of South Carolina. He didn’t cut corners on his own academic experience either.

The 31-year-old exercise science major and business administration minor achieved a perfect GPA in his coursework while being a father to two sons, working part time as a bartender and personal trainer, regularly performing as a solo singer/guitarist and taking on multiple leadership roles on campus.

Herring has been an amazing advocate for the veteran community on campus, says Candace Terry, Student Veterans Association president and Navy veteran.

“Engaging the student veteran population is a feat,” Terry says. “Brooks has been integral in organizing events throughout the semester, sometimes every week, to keep veterans engaged with their peers, community and the school. He is a credit to our organization.”

Herring served in the Navy from 2005 to 2011 and deployed to Iraq and Africa and was an Army civilian from 2011 to 2013 and deployed to Afghanistan. He made a commitment to give back to others who have sacrificed while serving their country.

“I recognized after I started as a student that there was a need for advocacy on campus. My personality type just doesn’t let me sleep knowing (there’s that need for veterans) unless I’m doing something about it.” says Brooks, who was born on an Air Force base in Louisiana and raised in Conway, South Carolina.

Advocacy for veterans is important because going back to school can present a variety of challenges, he says.

“We have veterans who have served four years and are still relatively young, and we have retirees who have spent 20-plus years in the service,” Herring says. “The age difference plays a big role in many of them being able to relate to and interact with other students. Combat veterans especially tend to have issues with crowded classrooms and large classes.”

Most veterans grapple with balancing their families, homes, jobs, coursework and student organizations when they return to the classroom after serving in the military.

Like most veterans, Herring struggled with time management as he got more involved on campus during his three years while balancing family, work and classes. He also sometimes struggled to see his younger peers’ perspectives.

Younger students and “I have very different views on a great many things,” Herring says. “At the same time, I wanted to be their peer, and I wanted to be a college student and enjoy the experience as much as possible. I try to be as open as possible. I really want to bridge the gap between student veterans and traditional students.”

With the Student Veterans Association, Herring wrote the business plan for a grant proposal to create the Thomas Cooper Library veterans’ lounge. He also served as vice president for the organization.

“I would love to see all 1,000-plus veterans at USC become active members of the SVA,” Herring says. “In the past few years, we’ve built the SVA into a family and an organization that can offer centralized and personalized support to veterans on campus.

“We’ve fostered relationships that enable us to get results from numerous offices in a very short period of time. The larger the SVA, the greater and more effective the voice.”

Brooks has been integral in organizing events throughout the semester, sometimes every week, to keep veterans engaged with their peers, community and the school. He is a credit to our organization.

In addition to advocating for veterans, Herring was a U101 peer leader for two years and mentored JROTC cadets as they prepared for their military careers or higher education post-graduation. He also heavily promoted the Student Disability Resource Center; their services include providing accommodations for veterans with physical and mental health disabilities.

One of Herring’s other leadership roles on campus was supporting the importance of mental health and destigmatizing getting assistance. Herring was one of the faces of Student Health Services’ “Be Real. Be There. Mental Health Matters” campaign, which launched in fall 2016 and won a NASPA Silver Excellence Award.

“I’ve had to learn — through some very tough and trying lessons — that being open and willing to talk about my feelings is strength beyond strength,” Herring said during the campaign. “Bottling up my feelings never amounted to anything good, and talking to someone who’s willing to listen has been a saving grace — literally.”

Mental health assistance combined with the support of other veterans helped him succeed and make it to graduation.

Reflecting on his accomplishments as a Gamecock, Herring feels mixed emotions as his undergraduate chapter ends.

“I’m really excited, relieved, ready, proud and sad all at the same time,” he says. “Part of me doesn’t want this to end. At the same time, I’m ready to reach the milestone and hang it on my wall.

While Herring graduates in May, he will return to Carolina in the fall to pursue a doctorate in physical therapy. As a graduate student, he will continue to serve the veteran population on campus as the secretary of veterans’ affairs for Student Government and as the athletics and recreational activities director for the Student Veterans Association.

“The RunPhase program is my 4-year-old brainchild,” Herring says. “In 2014, I went to the Department of Veterans Affairs to ask about going back to school. I was given a number of personality and aptitude tests and told I belonged in the medical field. As a long-time weapons specialist, I found it humorous.”

Having what he calls an epiphany, Herring decided he wanted to help disabled veterans “be at their best again.”

The RunPhase program he hopes to launch in partnership with area medical and veterans’ organizations once he finishes his doctorate would provide physical therapy and strength training to disabled veterans as well as mental health support to help them get back on their feet, both physically and mentally.

Herring is already working with an amputee veteran and hopes to someday open his own facility.

“The goal of RunPhase is to provide the necessary tools for veterans to reach their physical and mental potential despite their conditions,” Herring says.

Herring’s dedication to serving the veteran population might have started when he was in the military and a student at Carolina, but his plans for the future will ensure his commitment continues long after graduation.