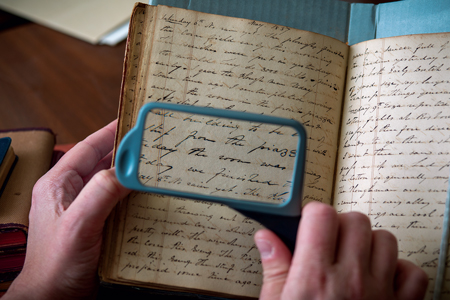 Meet the Library Detectives, a team of University Libraries professionals with remarkable resource-seeking vision and powers of perception. These scholarly sleuths are dedicated to solving the most puzzling cases for their student and faculty patrons.

“His handwriting is pretty wonderful, actually,” says Duncan, his head tilted into the book as he deciphered another page for the growing Thomas and Muller Family Papers digital collection. He has transcribed and digitized six of the 16 journals, and they are now full text searchable.

“I’ve worked with these kinds of manuscripts for as long as I’ve worked here,” says Duncan, a South Caroliniana Library manuscripts expert who came to University Libraries as a student employee in 2002. “In this passage, Thomas describes the birth of his second daughter, and here he describes how his family plans to escape mosquitos at night.

“As you’re transcribing, you learn things like what a cursive ‘S’ looked like in the 18th and 19th centuries. It looks like a strange letter ‘F.’ Double ‘S’ tends to look like ‘P.’ Once you know characteristics like these, you can fill in some blanks. There are different schools of handwriting that you can study, too, and there are tips and tricks you can learn.”

To decipher the journal, Duncan needs about an hour to translate one month. He and fellow manuscripts expert Edward Blessing are planning a workshop for later this year that will cover the basics of translating and reading cursive, a lost art for many of today’s students.

For Amie Freeman’s faculty patron, the search for a 19th-century Spanish serial was a race against time.

“A USC professor of Spanish and comparative literature needed access to a Spanish serial published in 1886, and he wanted to obtain this item before other researchers did so that he could be the first to publish on the subject,” says Freeman, Interlibrary Loan Librarian.

“A lot of times we’re able to locate an item through WorldCat, a global catalog that makes library collections around the world findable and accessible. But rarer items like this serial publication often don’t get indexed in WorldCat, so you have to go from library catalog to library catalog in the hope of finding it. So in this particular case, the patron had an idea of where the item might be, and he provided some information to point me in the right direction.

“I was able to ultimately find the serial through a catalog in a library in Berlin. I emailed that library with our request, and they explained that they had the only known existing copy and, for obvious reasons, it was noncirculating and could not be loaned to us. But I was able to arrange for the item to be digitized exclusively for our patron. They scanned it for us and emailed me a TIF file, which I forwarded to the patron, giving him access to a full, digitized scan of the material for his research. He was thrilled: I don’t think he expected to have access to it without having to travel to Berlin to see it in person. And he was the first academic to make use of the serial in a publication.”

In praise of marginalia

Michael Weisenburg and Jeanne Britton were about to send ten students on a treasure hunt through the Thomas Cooper Library stacks. But first, a pep talk.

“You should be able to find a lot of markings today, but remember we are not looking for 21st-century markings in old books,” Weisenburg says as he holds up an 18th-century volume whose yellow-highlighted pages practically glow.

As you’re transcribing, you learn things like what a cursive ‘S’ looked like in the 18th and 19th centuries. It looks like a strange letter ‘F.’ Double ‘S’ tends to look like ‘P.’ Once you know characteristics like these, you can fill in some blanks. There are different schools of handwriting that you can study, too, and there are tips and tricks you can learn.

“We want to find handmade markings made by readers from the past in early 20th-, 19th-, and 18th-century books, and sometimes those markings hide in interesting places,” he says. “Be on the lookout for embossed bindings, old bindings, old covers. Look for bookplates with the owner’s name. Names written on an inside page that look like they were written with a quill or steel-point pen. Gift inscriptions such as ‘Happy birthday to Mary from Momma.’ Handwritten question marks in the margins. A date written on the last page of a book signifying when a reader finished reading the book. Something stuck between the pages of a book, like a letter or card.”

The student discoveries for this day include a volume of Thomas Hood’s "Poetical Works" (1879).

“It had been used as a kind of scrapbook, with lots of newspaper clippings glued onto the endpapers and throughout the book. It also contained extensive underlining and marginal notations, along with several doodles.”

Weisenburg, Instructional Librarian in the Irvin Department of Rare Books and Special Collections, is co-principle investigator on a USC Provost Humanities Grant to collect, catalog and disseminate significant marks left by historical readers. In fall 2016, he and co-PI Jeanne Britton, Irvin Department Curator, hosted a similar event when Andrew Stauffer of the University of Virginia visited campus to discuss his "Ghostwriting" project. The USC finds are being added to library records following the model of UVA’s "Booktraces.” 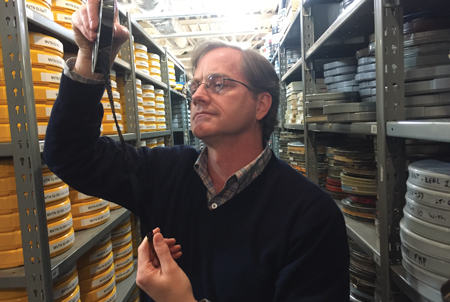 Thanks to Greg Wilsbacher, a Marine has been reunited with his memories.

“We were contacted by a U.S. Marine Corps cameraman who is in his early 90s,” says Wilsbacher, Moving Image Research Collections curator. “He asked if we could search through our newly acquired U.S. Marine Corps Film Archive and find some of the films he shot in the 1960s, toward the end of his career when he was in Vietnam. To my delight — and to his — we were able to find two of them. We promptly got those scanned, turned them into DVDs, and mailed them to him in Texas.”

Lisa Wrightenberry was asked to do something no one else had been able to do: find Rufus McDonald.

An article in the Chicago Tribune revealed that McDonald, a contractor hired to clear out an old house in Chicago, had uncovered a trove of documents belonging to Richard Greener (1844-1922). As its first African-American graduate, Greener was important to Harvard University. And because Greener was Carolina’s first African-American professor, a graduate of the law school and a campus librarian, he was also important to South Carolina.

“When Dean McNally learned that Richard Greener’s law degree and law license had been found, he knew the documents belonged in our collection,” says Wrightenberry, the dean’s administrative coordinator.

“Chicago is a big city, and all we knew was that Rufus worked for a trash removal company in the Chicago area. I was handed four pages listing more than 35 trash removal companies in Chicago. Instead of making all those cold calls, I did some extensive internet research, used Google maps, and found a zip code for a ‘Rufus McDonald.’ From there I found an address and phone number. The phone number was incorrect, so I took a chance, wrote a letter and sent it to someone I thought could be him.”

The letter praised McDonald for recognizing the importance of such historical documents and planted the idea that the documents needed to be “home.” It also included the dean’s phone number and a request to call.

“Dean McNally was away on a business trip when he called me and exclaimed, ‘Guess who I just talked to?’,” Wrightenberry says. “He was ecstatic that we reached out to the right Rufus and he had immediately gotten in touch. It was the start of our friendship with him, and the first step in bringing the Greener documents to USC.”

“I encouraged him to hang onto the rest of the Greener documents, and I helped him search for collectors and organizations who might be interested in buying them. As it turns out, a long-time University Libraries friend purchased the documents and donated them to the university. Now they’ve all been reunited in our collection.”

If Kathy Snediker had a moniker, it might be “Resource Whisperer.” The research and instruction librarian has a way of leading faculty and students to the material they need and then seamlessly making that material available to them.

“Kathy has been most helpful when I have taught Historians Craft (HIST 300), a methods course that teaches students how to be historians,” history professor Wanda Hendricks says. “Two of the most important aspects of the course are teaching and showing the students what primary and secondary sources are and locating those sources. Kathy does a superb job of guiding the students during her presentations.

“Kathy also assisted me with the Rise of Industrial America: Gilded Age and Progressive Era (HIST 405) course I’m teaching this spring. One of the graded assignments is daily readings in newspapers during the 50-year period from 1870 to 1920. Kathy came to Gambrell Hall to show my students how to locate newspapers from the time period, and she created an online library guide for them that is now linked to Blackboard.

“Thanks to Kathy, for the first time in my teaching career I did not assign a hard copy textbook to the class,” Hendricks says. “All of the readings, including the free textbook 'American Yawp' and three monographs, are digital copies that students can retrieve from the University Libraries’ site. Ultimately, the only items that students needed to purchase were two blue books for exams.”