Religious studies professor James Cutsinger has wrestled with life’s deep questions of sin, faith and suffering, pondering the existence of God and the meaning of life with thousands of students over the course of nearly four decades at the University of South Carolina. 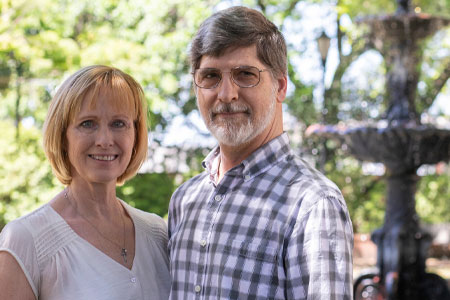 James Cutsinger taught in religious studies at USC for 37 years, retiring after a diagnosis of stage 4 lung cancer. His wife, Carol, retired last year after 19 years as a staff member at USC Aiken.

Now, at age 65, Cutsinger is facing a final exam of sorts — the test of his own theological insights in the face of a stage 4 cancer diagnosis. Cutsinger, who joined the university faculty in 1980 and officially retired this semester, says coming to terms with the grim diagnosis has confirmed his convictions.

“I'm ready to verify what I think I know,” he says. “I’ve been praying, pondering, teaching and speculating about this stuff for over 40 years. It’s going to be interesting to find out how it all works.

“I guess some people have crises of faith — but that’s not me at all. It’s all gotten more certain and deep, not more doubtful or shallow.”

Cutsinger began teaching at Carolina in 1980 at age 27, fresh out of a doctoral program at Harvard. Except for a year of sabbatical, he taught every semester through spring 2017, winning many teaching accolades including the prestigious Michael J. Mungo Distinguished Professor of the Year award. “I had no intention of retiring,” he says. “I had 37 years, and I was going for 50. I would never get tired of teaching.”

But the onset of a paralyzed vocal chord late last May led to a diagnosis of lung cancer, quite a surprise for someone who had never smoked. His wife, Carol, retired as an administrative assistant at USC Aiken just before his diagnosis. The past year has been difficult with several health crises, but after chemotherapy and radiation, Cutsinger’s health has stabilized for now and the prospect of a new immunotherapy trial offers some measure of hope.

In the meantime, many of Cutsinger’s former students have reached out to their former professor and mentor, and he has responded with a monthly email communique that chronicles his health and spiritual state. The emails, some of them quite lengthy, have become an extension of the classroom lectern, giving Cutsinger a platform to continue engaging former students and friends about the deep questions of life, whether mortal or eternal.

Most of the 4,000 or so students who took his courses and seminars over the years remember his contemplative nature and intellectually rigorous approach to any topic. Death, it seems, is no exception.

“I’ve already bought my coffin, which is a very good memento mori. Do you know that Latin expression? It literally means ‘remember to die,’ but it comes by extension to mean, ‘remember, you will die,’ ” he says.

“I’m not looking forward to the dying process, but the passageway itself is going to be exhilarating, interesting, fascinating, especially for someone like me who studies religion, and not just in the way of someone collecting stamps or coins. The reason I chose this profession was so that I could think about what I had already existentially internalized.”