Dancing to the top 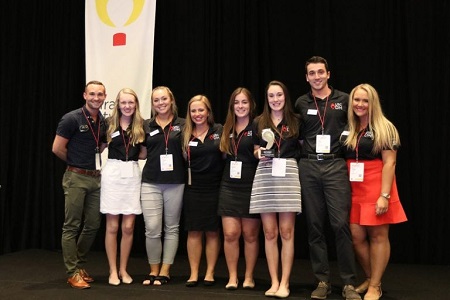 On March 3, University of South Carolina President Harris Pastides stood on the stage at the Strom Thurmond Wellness and Fitness Center and explained just how much USC Dance Marathon (USCDM) means to the university, the community and the children’s hospital the student organization serves.

This month, at its annual conference in Indianapolis, the international Miracle Network Dance Marathon organization officially agreed with the president, awarding the South Carolina chapter three national awards for their work in the 2017-18 school year.

“It was such an incredible experience,” says Kaity Lynch, a marketing major in the Darla Moore School of Business who served as the organization’s vice president of communications in 2017-18 and will be the 2018-19 president. “There are hundreds of other collegiate programs across the nation who have achieved incredible things for their local Children's Miracle Network hospitals in the past year, and for USC Dance Marathon to be recognized as one of the best was such an honor.”

USCDM earned the Extra Comma Club Award in recognition of raising more than $1 million for the first time. The organization brought in $1,025,171 for the kids at Palmetto Health Children’s Hospital. More than 1,700 students took part in the biggest success yet for USC’s largest student-run philanthropic organization, which works year-round, with each school year culminating in the 14-hour main event at which the fundraising total is revealed.

"It just once again showed us that together we have the power to do amazing things as an organization, a school and a community. And not just in Columbia, but on a national level.”

The Miracle Network Dance Marathon organization also recognized USCDM with the Miracle Maker Award for organizations more than 15 years old. The award is presented to Dance Marathon programs with the highest combined monetary and percentage increases in their overall fundraising over the previous year.

The final award was not directly tied to fundraising, but certainly carries bragging rights. The team claimed the Best Morale Dance trophy, winning it after a dance-off against Clemson Dance Marathon.

“It was also a nice reminder that nothing is impossible — because had you asked me at the beginning of the weekend if we would win best morale dance after beating Clemson in a dance-off, I definitely would have told you that you were crazy," Lynch says. “For the entire USCDM team moving forward, it just once again showed us that together we have the power to do amazing things as an organization, a school and a community. And not just in Columbia, but on a national level.”

USCDM is open to all Carolina students, and welcomes community support. Students who would like to join and anyone looking for more information can find it at the student organization’s website.