Alumna’s career has been on international track

Wendy Bashnan’s career began in her rural S.C. hometown 25 years ago, but quickly sprouted wings. Since 1994, she’s worked in Washington, D.C., Miami, and New York, and has spent more than half of her professional life abroad in South America, Asia, Africa, the Middle East and Europe. 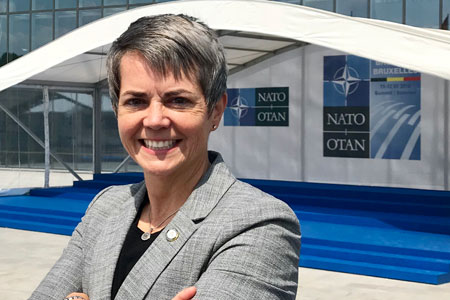 Wendy Bashnan has spent more than half of her professional life abroad, most recently as head of security at NATO, headquartered in Brussels, Belgium.

After earning a bachelor’s in political science and a master’s in criminal justice, both from the University of South Carolina, Bashnan moved back to her native Colleton County to work for the Department of Probation, Parole and Pardon Services. The work was complicated and challenging, she says, but provided a foundation in law enforcement that served her well when the U.S. Department of State’s Diplomatic Security Service came calling.

Bashnan’s resume now includes assignments in Venezuela, Iraq, China and, most recently, Belgium, where she is deputy assistant secretary general for security at NATO headquarters in Brussels. It’s been an interesting ride so far, she says.

“I can say 100 percent that there’s not a day that I haven’t looked forward to going to work,” Bashnan says.

That might be because there have been few dull moments. Bashnan was the deputy in charge of American security interests before and during the 2008 Summer Olympics in the People’s Republic of China; served as senior U.S. law enforcement and security adviser to the U.S. Ambassador in Caracas, Venezuela; and was the regional security officer for Northern Iraq while the State Department was opening the U.S. Consulate General in Erbil, Iraq.

“There’s always a certain amount of culture shock when you move overseas,” Bashnan says, “but there’s training for that kind of stuff. In every country, you’re working with different protocols for things like fire safety, threat reporting, media management and the logistics of moving and coordinating people for large gatherings.

“What I’ve found is that in an international environment, we have to think first about commonality. If you focus only on the differences, you won’t get anything done.”

At the end of the day, I get to stand on the sidelines of history. It’s a great day to be a proud Gamecock influencing the future of diplomacy and democracy.

That’s especially true in her current posting with NATO, which includes 29-member countries, each with its own national interests and agenda. “My job supersedes politics,” Bashnan says. “For NATO to have lasted almost 70 years, it has to be about the strength of the alliance and above politics.

“Political leaders will have their national interests that they need to expand or influence, but our commitment to the alliance doesn’t change. That commitment started in 1949 and is affirmed by the 29 members and growing.”

As a security professional responsible for the safety of world leaders during the Summit and NATO member interests, Bashnan is especially keen to threats of violent extremism. Some countries have had to deal with terrorism — either homegrown or globally instigated — for decades, while others have become acquainted with extremism only in recent years, she says.  Her second major concern is the cyber domain.

“We’re a digital society now, and it’s become critically important how we manage the digital world we live in,” Bashnan says. “You’ve got hackers, state-sponsored and freelance, plus the insider threat of disgruntled employees. We’ve got to balance security with confidentiality and privacy issues.”

Bashnan has had opportunities to talk to students, including a recent group from Carolina who were visiting the U.S. Embassy in Brussels earlier this summer. She encourages them to find and follow their career passions and includes a pitch to join her own Department of State Diplomatic Security Service, which strives to maximize the diversity of its candidate pool.

“I am blessed that I enjoy what I do,” she says. “At the end of the day, I get to stand on the sidelines of history. It’s a great day to be a proud Gamecock influencing the future of diplomacy and democracy. I hope more young people look to public service and find a passion like I did.”