Stepping up to the plate

The University of South Carolina’s Russell House University Union has a new look this fall and a lot of great new meal options to match. To top it off, one of America’s most famous chefs will be on campus Aug. 28 to get things started at the restaurant she helped create.

Cat Cora, famous for her starring roles on television cooking shows like “Iron Chef America,” collaborated with Aramark to develop the concept for Olilo, a Mediterranean-themed restaurant now open at Russell House. 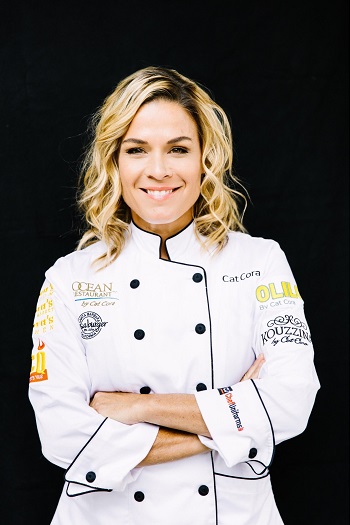 Cora will join Carolina Food Company (operator of Russell House restaurants) for a ribbon-cutting ceremony at Olilo at 10:30 a.m. Aug. 28. Students, faculty and staff are invited to the ceremony, and students will have a chance to win free copies of Cora’s cookbooks.

The chef will sign copies of her books at the University Bookstore in Russell House from 11 a.m.-noon, then help serve food at Olilo and mingle with customers until 1 p.m.

At 1:15 p.m., she will take part in a question and answer session with students from the School of Hotel, Restaurant and Tourism Management. Cora will

Since then, she has blazed her own trail through the culinary world, becoming the first female inducted into The American Academy of Chefs Culinary Hall of Fame.

Cora has opened more than a dozen restaurants throughout the U.S. and in Singapore. She also founded Chefs for Humanity. Modeled after Doctors Without Borders, the nonprofit agency gathers the culinary community to raise funds and provide resources for important emergency, educational and hunger-related causes.

In 2010, Cora joined first lady Michelle Obama as part of her Chefs Move to Schools campaign in an effort to provide nutritional guidance and education from professional chefs to schools nationwide.

More information on Cora, including some of her favorite recipes, is available at the chef’s website.