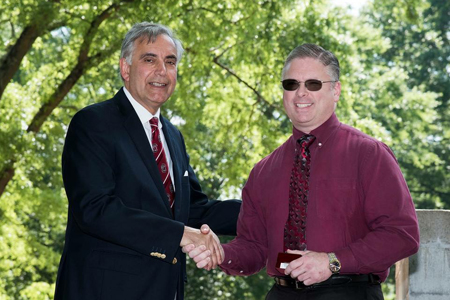 “The University of South Carolina has made a huge impact in preparing me personally and professionally for the next chapters of my life.” — Bob Johnston, '16 organizational leadership

When Bob Johnston found himself out of work during the economic downtown of 2008, he hired on with a temp agency.

He was sent to a logistics company in his hometown of Laurens where he did such a good job, the company offered him a salaried management position — his first. He knew he was going to need to up his game to succeed.

“I knew I had to do something to continue my education and get that bachelor’s degree in some business-related field,” Johnston says.

“One day, I went over to the USC campus location in Laurens, and I found out they had this organizational leadership degree through Palmetto College,” Johnston, 46, says. “I think the biggest thing that helped me was that I was already in the field that I was studying. I was able to take concepts learned in my classes and assignments and immediately put them to use in the workplace.

“I think that a big part of my education is the fact that it was an education that I was using on the spot.”

Johnston had moved to a job at Walmart’s distribution center in the Upstate and had earned his associate degree from Piedmont Technical College in the Upstate, but that wasn’t going to get him where he wanted to be.

“I knew I was going to have to do something more,” he says.

The location in Laurens is part of USC Union, which is a part of the larger statewide Palmetto College.

“The location of the campus was a huge help,” he says. “But it was that academic major that sold me.”

Johnston took psychology classes and others that he never would have thought about. “It allowed me to experience a lot of new things. But the focus of the major is you are dealing with things that are going to be applicable in the workplace.”

I was able to take concepts learned in my classes and assignments and immediately put them to use in the workplace.

Rinehart says Johnston, who worked full-time during his studies, owes his success largely to his own work ethic.

“He is extremely hardworking and very proactive,” Rinehart says. “He was dedicated to getting his degree, but he also was good at helping other students if they needed it.”

For a nontraditional student, Johnston immersed himself in the full student experience. During his two-and-a-half years as a Carolina student, he took most of his classes at the Laurens location, but drove to Union to get one last class so he could graduate in December 2016. He participated in winter commencement exercises in Columbia and even got his Carolina ring at a ring ceremony on the Columbia campus.

“I participated in all of it,” Johnston says. “I did the ring ceremony. I got my cap and gown and I walked. My dad had surgery Dec. 6 and I graduated on Dec. 12, and he was able to get there,” Johnston says. “That meant a lot to me.”

Johnston has considered continuing his education, but now finds himself a dual-career professional.

He’s still in management at Walmart’s logistics center in Laurens County, but he’s also a buyer agent with Keller Williams Realty in Greenville — a job he pursued to help him pay for his education.

That second job brought him back recently to the Laurens campus location where he gave a presentation to students about buying their first home.

“My real estate career gives me a professional brand to expand my horizons, but leadership and management will always be my passion,” he says. “The University of South Carolina has made a huge impact in preparing me personally and professionally for the next chapters of my life.”