Last week, the Metropolitan Opera. This week, the University of South Carolina. 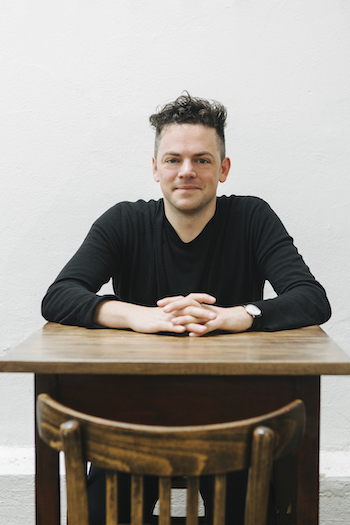 Composer Nico Muhly is on campus this week as part of a residency with the School of Music. The USC Wind Ensemble performs the world premiere of Muhly's Reliable Sources for Bassoon and Wind Ensemble in a free concert at the Koger Center on Nov. 15 at 7:30 p.m.

As 37-year-old composer Nico Muhly arrived on campus this week for a residency and a world premiere, he had just wrapped up a three-week run of Marnie, the second opera he’s composed for the Metropolitan Opera in New York City. Since releasing his first album, Speaks Volumes, in 2006, Muhly has not only written for the Met — he’s also written soundtracks (The Reader in 2008, Kill Your Darlings in 2013); had commissions from Carnegie Hall and the Philadelphia Orchestra; and composed choral works for the Hilliard Ensemble and the Tallis Scholars.

Now, make that one more work: Muhly is at the university to present the world premiere of his new bassoon concerto, Reliable Sources for Bassoon and Wind Ensemble.

Reliable Sources is dedicated to Mike Harley, associate professor of bassoon and a member of Alarm Will Sound, and Scott Weiss, director of orchestras and Sarah Bolick Smith distinguished professor of music. Harley and Weiss led a consortium of 17 institutions — including the Eastman School of Music — in commissioning the piece. It will debut in a free USC Wind Ensemble concert at the Koger Center on Nov. 15; the concert will also include works by Johann Sebastian Bach, Gustav Holst and Leonard Bernstein.

“I wasn’t about to write a bassoon concerto for anybody else,” Muhly says of Harley. The two have been friends for years, and Muhly has great respect for Harley’s work in Alarm Will Sound. “They all play virtuosically well — but not in a traditional, straightforward way. They take their instrument outside of itself.”

The Muhly-Harley connection is one that will now benefit the entire university community. Muhly rarely does residencies in the United States, but he’s excited about working directly with music students at USC.

“I want to spend as much time as possible being useful to the students,” he says.

Rehearsals for Reliable Sources will benefit music students whether they are performance or composition majors, as students work directly with a contemporary composer on the final shaping of a new work. As Muhly listens, he’ll provide real-time feedback that will affect the way the musicians are playing and, likely, even some of the notes themselves.

The classical music world is definitely evolving, and our School of Music is all about creating diversely skilled musicians.

“I have learned something: What is fun for me is I don’t even like to look at the score during rehearsal — so I feel like a person and not an accountant,” Muhly jokes. Instead of obsessing over every detail, he says, “I can sort of sculpt the thing and think about pacing” along with the conductor, in this case Weiss.

As performance students work to get it right, composition students will work with Muhly to ensure that the musicians have the necessary instructions in the score to do so.

“There are several graduate students who will shadow Nico during the rehearsal process,” Weiss says. “They will be his scribes taking down those changes. That will be really fascinating for the student composers — they are actually part of his process.”

Muhly’s residency offers “a wonderful opportunity for students to work with a composer of Nico’s stature,” Weiss says. “He’ll be talking about his compositional career and answering questions. I love to hear the questions that the [student] composers ask — everything from business to the creative process.” 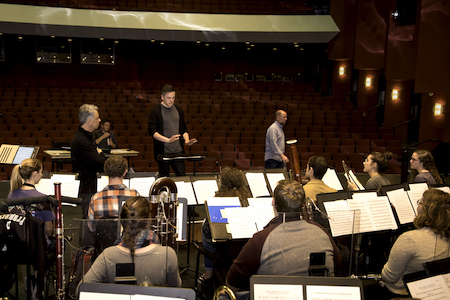 Muhly will work one-on-one with composition students, looking over their scores and giving feedback, as well as talking to music students more generally about their chosen field. The advice he dispenses could vary widely.

Ultimately, Muhly says: “You have to figure out what you really love doing — with the enormous caveat that no knowledge is bad. You have to take that Wagner class even if you hate Wagner. You might think you don’t need ‘advanced techniques in whatever,’ but you do.”

Muhly’s visit is a testament to the School of Music’s efforts to prepare the musicians of tomorrow.

“The classical music world is definitely evolving, and our School of Music is all about creating diversely skilled musicians,” Weiss says. “The skills required to bring Bach and Nico’s piece to life are similar but different — this gives them an outlook on making music that only happens when you are working with composers.”