The University of South Carolina’s president, Harris Pastides, and his wife, Patricia Moore-Pastides, make quite a team. On Friday (Jan. 25), a portrait of the two was unveiled at the UofSC Alumni Center to honor the power couple.

The unveiling comes at an appropriate time, with President Pastides’ retirement looming this summer, but the process actually began a year ago, before anyone knew of that plan. 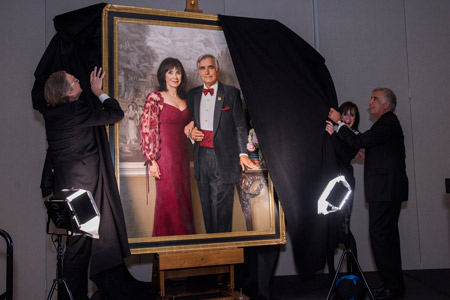 A portrait of Harris Pastides and Patricia Moore-Pastides was unveiled Friday at the University of South Carolina Alumni Center.

Mark Buyck, a former University of South Carolina Board of Trustees member, recalls getting things started. “Johnny Fields and I talked to Harris about having his portrait done before he got, quote, ‘too old,’” he says, “and we had no idea at the time that he would be retiring this year.” Fields was a member of the university’s Board of Visitors and the Board of Directors of the University of South Carolina Development Foundation before his death last March.

The decision to pursue the portrait was an easy one for Buyck, who has high praise for Pastides. “I would say — and I think a lot of people agree with me — that the past 10 years have really been the golden era of the university. We have progressed in so many phases. It’s been a really wonderful and progressive era under Pastides’ leadership.”

When first approached, Pastides was hesitant, but the thought of having his wife by his side made him reconsider.

“We pushed him, and after a while Harris said — and we knew it was true — that being president was a joint job with Patricia and that he would like to have the portrait of both of them together. We thought that was a good idea as well,” says Buyck.

Early in the process, it was agreed that funds for the project would be raised from private donors. “It was the easiest fund-raising I’ve ever done in my life,” says Susie VanHuss, a longtime Gamecock and the secretary/treasurer of the University Foundations’ Board of Directors.

VanHuss heard about the fledgling project from Jancy Houck, South Carolina’s vice president of the Division of Development, at an event and told Houck she wanted to donate — and to recruit other donors.

“At the same event where I saw Jancy,” VanHuss explains, “I saw four really good friends who are supporters of the university, and all four of them immediately said they would make generous contributions. Harris and Patricia are simply loved by virtually everybody they’ve encountered.”

From donors to students, the president and first lady’s impact has been immense. The day that Pastides announced his retirement during his 2018 State of the University address, VanHuss was greeting student nurses at a flu clinic. Every student she spoke to said they were sad because of the announcement. “‘You know what makes me the most sad?’ they would say. ‘He won’t be here to sign my diploma when I graduate next year.’ I probably had 20 students make that statement to me,” says VanHuss. “The reaction from students was unbelievable. It really impacted what I thought about the whole university.”

Soon after agreeing to the idea of a portrait, the president and his wife chose to work with John Seibels Walker, a highly regarded painter and portrait artist — and a native South Carolinian.

“This was certainly a great honor because I did grow up truly down the street from campus,” says Walker. “Seeing the changes the university has made and all that Harris and Patricia have done, it’s particularly nice to be a part of this.”

An expert in academic realist painting, Walker says the biggest challenge was figuring out how to best represent the two subjects. “Obviously, Patricia and Harris are a charming and outgoing couple, and capturing that dynamism is a good thing.”

Walker says such portraits are composites of information: he draws from direct observation and photography to create a composition that has balance and harmony. “It’s something that takes on a life of its own,” Walker explains, “but I was aware at some point that their clasped hands are at the center of the painting, and it’s very symbolic about this couple. They’re a dynamic duo, and to know them and see how well they play off each other and share together was a real pleasure.”

What Walker ultimately hopes to create is a work of art that honors his subjects and captures a moment in time. “But it’s not just about now. It becomes a time capsule for 50 years, 100 years from now. It will tell future generations that these people were loved, were valued.”