Susan Lang will travel to the ends of the earth for her research — or at least to the middle of the ocean.

In September 2018, Lang, assistant professor of aqueous geochemistry at the University of South Carolina, was co-lead researcher on a major research expedition to one of the most remote parts of the Atlantic — an unusual hydrothermal field dubbed Lost City. The goal? To better understand how the unique site’s extensive microbial life survive — and thrive — despite the hostile deep-water ecosystem.

It wasn’t Lang’s first trip to Lost City. She visited it on previous research trips, in 2003 and 2005, just two years after its discovery. But thanks to advanced equipment, new sampling techniques, a team of researchers from several universities and grant funding from several sponsors, including the National Science Foundation, the 2018 expedition sought data previously unobtainable. The team also hoped to shed light on one of the planet’s greatest secrets: how life originates.

On Sept. 8, 2018, in the face of rough weather, 55 scientists, students and crew members set sail from Cape Cod to Lost City aboard the U.S. Navy research vessel Atlantis. The six-day journey swelled to nine as the expedition encountered a hurricane and small tropical storm en route to one of the most remote places on Earth. 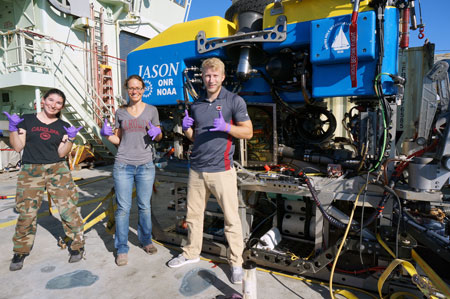 “We had to let one hurricane sweep through the study site before we arrived,” says Lang.

But once they did arrive, the ship stayed on station east of the Mid-Atlantic Ridge for about two weeks. Lang was joined by two South Carolina students, Jessica Frankle (’18, marine science) and Cameron Henderson, a senior marine science major. During that time, researchers deployed a remotely operated vehicle (ROV) named Jason, gathered samples from the ocean floor and performed initial on-board testing. The samples were then earmarked for exhaustive analysis in labs around the country, including Lang’s.

“On an expedition, everyone is focused on a singular task,” she says. “When you have that many people working in concert and everyone brings their own expertise or background, it’s such an amazing experience.”

Frankle says the time at sea was an introduction to new procedures, concepts and the fascinating minutiae of microbiology and geology —  with the added complication of being at the sea’s mercy. “When we were ROV sampling on site, no one really got much sleep between working their shift operating sampling gear, subsampling when Jason came on deck, and preparing it to go down again ASAP,” she explains.

What the team found at Lost City continues to inspire researchers, according to Lang.

Located atop the 10-mile-wide Atlantis Massif, a massive subaquatic mountain that towers an estimated 14,000 feet above the sea floor, Lost City is in one of most forbidding undersea regions on Earth. Somehow, though, microbial life prospers in the dozens of hydrothermal chimneys that grow in the field, which is approximately the same size as a city block.

Many of these Lost City chimneys emit nutrient-rich fluids, but the process is not driven by volcanic activity. Rather, they form when the carbon in the seawater reacts with the silica-poor rock of the Earth’s mantle. The interaction, called serpentization, creates energy in the forms of hydrogen and organic molecules that support the microbes and other life living on the surface of the chimneys.

As researchers analyze the chimney fluid and surface samples, researchers hope to learn how microbes access carbon and nutrients thousands of feet below the water’s surface. One leading hypothesis among the team is that the mountain contains another family of microbes responsible for introducing the life-giving elements into the ecosystem.

Race to the bottom

Unfortunately for researchers like Lang, other parties are also eyeing the Lost City area. In August 2017, an authorized United Nations agency granted Poland the rights to exploit the seabed where Lost City is located.

The deep seafloor can be rich with valuable minerals, she explains, and just as scientists’ capabilities have progressed in the decades since Lost City was discovered, commercial miners can now explore at greater depths and distances than ever before.

I came back from sea a different woman. I realized that I needed to be an oceanographer. I also defined myself more thoughtfully and gained newfound self-confidence. I came back to land dying to go to sea again.

“Less than 1 percent of the ocean has ever been seen so we know there are unique organisms that will be devastated by mining and vanish without us knowing about them,” says Lang. “With Lost City, we’re anxious to characterize it now the way things are — before it starts getting potentially disturbed.”

Indeed, the process of gathering minerals can result in countless casualties. Miners essentially vacuum the seafloor to harvest minerals and, in the process, entrap anything living on, in and around the surface. Life and lifecycles are brutally interrupted in ways we can never fully understand, Lang says.

Luckily, Lost City itself lacks the valuable minerals that interest mining operations, and its location currently provides something of an impediment.

“Lost City isn’t low hanging fruit. There are other regions in much greater danger,” says Lang.

Now that the expedition is over, the work continues — and will continue for years — in labs across the country. 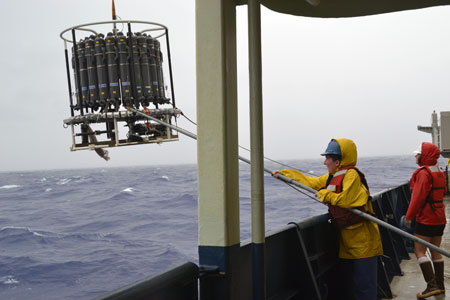 “We are chipping away in the lab and haven’t gotten to study the nutrients yet,” Lang explains. “We’ve done a much better job than what we’ve been able to do previously looking at how much inorganic carbon is there. We’re still in a bit of wait-and-see mode because analyses take a long, long time.”

Seeing the sample results come to life in the lab is a thrill for Frankle. “Getting to see the results of what we collected is like bringing the excitement of sitting in the Jason control room back to land,” she says.

In the meantime, Lang is firming up plans for a fall 2019 expedition to the Mid-Cayman Rise where the research team will explore two hydrothermal fields with contrasting chemistries. She’s also planning a future visit to Lost City.

Being at sea takes her away from the lab and the presentation of research around the world, but Lost City expeditions are special for her and fellow undersea researchers, says Lang, who hopes the discoveries and data from last year’s tumultuous expedition will begin to close the gap on questions both large and small. “I’m amazed every time we analyze samples,” she says. “We are already learning things that bring us that much further down the path.”

In the years ahead, the samples will be examined, analyzed, catalogued and shared with the members of the team, fellow scientists and expedition funders.

Preserving and studying Lost City has become a mission for many researchers for what may lie there. They believe the spontaneous processes of Lost City — or a site much like it — could be a blueprint for how life began on Earth.

“It’s unique and really the most extreme spot we’ve found,” says Lang. “I think the questions we can answer there are truly ‘What is the origin of life?’ level. I love all my research questions the same, but that’s the one that’s just both spectacular and beautiful.”

The expedition was equally profound for newcomer Frankle, who believes the experience forever altered her life and professional pursuits.

“I came back from sea a different woman,” she explains. “I realized that I needed to be an oceanographer. I also defined myself more thoughtfully and gained newfound self-confidence. I came back to land dying to go to sea again.”

“I loved doing the work, my interactions with the ship’s community, and even the minute details like listening to the waves break against the boat as I went to sleep. I’m still figuring out my path to get back to sea, but for now, I’m processing Lost City samples for a master’s thesis, and I could not be more excited.”