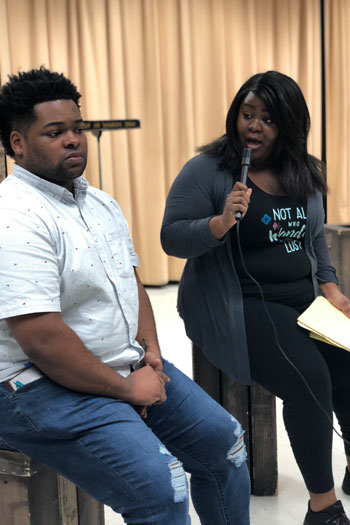 The two lead singers of "Armida" practice their roles.

Preparations for any type of musical performance are often strenuous. Whether it’s a choir, an orchestra or an opera cast, rehearsals are usually long, somewhat repetitive and focus on the music, not the subject behind the music.

Practice for Armida, an opera composed by Judith Weir in 2005 that re-imagines the love story from Torquato Tasso’s 1581 epic poem set in the First Crusade, has been a bit different.

Weir has updated the story to be representative of Middle Eastern conflicts in the present day, but there is no set time or specific country.

“There’s a city that’s being occupied and there’s a force outside of the city trying to retake the city, but we don’t know who they are or what they’re fighting for,” says director Ellen Douglas Schlaefer.

Most of the performers in Armida have grown up with some type of conflict in the Middle East as a constant in their lives, so Schlaefer is having them do research about the region and the Iraq War of the early 2000s to gain perspective beyond the music on the page.

“One of our tasks is looking up certain types of images we can use on this and they’re coming in and telling me things they’ve discovered,” Schlaefer says. “Little epiphanies they’ve had about the world and their characters, and about their characters in this war and conflict as a whole.”

Those insights help bring to life a conflict that is a world away for most Americans — even though U.S. soldiers have been deployed and fighting in the Middle East for nearly 20 years.

But fighting, religion and nationalism aren’t the main focus of the play.

“It’s about people who are in conflict who find a common moment and they fall in love,” Schlaefer says.

“It gives us the opportunity to have women portraying women how women actually are, not as someone who’s perpetually a damsel in distress.”

In this case, the love interests are Rinaldo, a soldier who’s a poet with a soft side, and Armida, a newscaster covering the war.

Weir’s interpretation of the story differs from the way it’s been performed in operas by Handel, Haydn and Rossini with the romance portrayed as more innocent and slowly building across the scenes until the two lovers meet.

“It gives us the opportunity to have women portraying women how women actually are, not as someone who’s perpetually a damsel in distress,” lead singer Mary Louise Layton says. “We have a woman who’s a strong composer, a strong female lead and musical content that supports that type of role.”

Schlaefer said this is a rather new development in the opera world. It has always been more difficult for composers who are women to get their works produced. Fortunately, the number of productions of operas written by women has been steadily increasing since the 1970s.

“It has inspired me immensely to consider myself as something more than just a voice and someone who sings, to be able to use my voice in other ways such as Weir has done,” Layton says.

Performances of Armida will be April 12 and 14 in the School of Music’s second floor recital hall. It’s a 50 minute one-act opera with no intermission. Admission is free.