Hollings’ legacy lives on at UofSC

From postwar growth to special collections, Hollings was an ardent university supporter

As political leaders pay final respects this week to former U.S. Sen. Ernest “Fritz” Hollings, who died April 6 at age 97, the University of South Carolina community has much to reflect on in its myriad connections with one of the state’s most beloved public servants.

Hollings, a 1947 graduate of the university’s School of Law, enrolled in the school in 1945, exactly one day after mustering out of the U.S. Army. The Charleston native and Citadel graduate had served as an artillery officer during World War II and, like many veterans, was eager to get on with his education.

“Everybody was coming back from the war, and they all thought they wanted to be lawyers,” Hollings quipped in an interview decades later. “We started with about 122, and 22 graduated.” 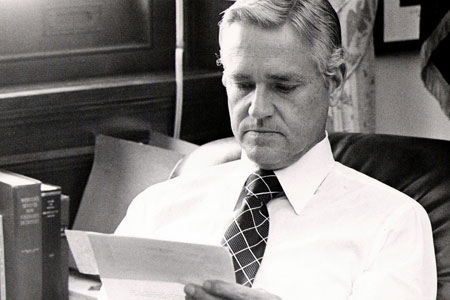 A 1947 graduate of the university's School of Law, Ernest "Fritz" Hollings' legacy of public service to the Palmetto State — and his many connections to the University of South Carolina — will continue for decades to come.

The future S.C. governor and longtime U.S. senator later thanked Sarah Leverette, a 1942 South Carolina law school graduate who became the school’s librarian, for keeping the library open for extended hours, allowing Hollings — and perhaps other returned veterans — to burn the midnight oil. In Hollings’ case, those long hours were well spent; he completed his law degree in 21 months.

Had Hollings devoted his career solely to practicing law, the university might not have crossed paths with him again. But after being elected at age 26 to the state House of Representatives, Hollings went on to serve as lieutenant governor and, in 1958, as governor of the Palmetto State. During that four-year term, he encouraged the university to contract with an outside consultant to review its administrative structure and physical campus needs. The university embraced the consultants’ recommendations and, as a result, was much better prepared for the quantum growth in enrollment brought on by the post-war Baby Boom.

The governor then called for an audit of all of higher education in South Carolina, which prompted the university and its peers to up their game in graduate programs and accreditation — again, a much-needed step toward accommodating the enrollment boom and the ongoing educational needs of state citizens.

As a U.S. senator representing the Palmetto State from 1966 to 2005, Hollings continued to have a positive impact on the university in direct and indirect ways. In the 1970s, the senator played a major role in the passage of major environmental laws and in the creation of the National Oceanic and Atmospheric Administration. Following his retirement from public service in 2005, the NOAA Hollings Undergraduate Scholarship was established, providing college students with tuition support and paid summer internships with NOAA across the country.

[Hollings Scholars] have dedicated their careers to solving the complex problems of policy, science and education and are making our world a better place through their work.

Since the program’s inception, 50 UofSC students have been named Hollings Scholars with recipients from the university every year except one.

“The financial package, the NOAA internships and the community of young scholars make the Hollings Scholarship a powerful formative experience,” says Novella Beskid, director of the university’s Fellowships and Scholar Programs. “USC’s Hollings Scholars have gone on to be Truman, Rhodes, Udall, Goldwater, Fulbright, NSF, Truman and Rhodes Scholars, among others, and been admitted to the leading graduate programs in the world.

“They have dedicated their careers to solving the complex problems of policy, science and education and are making our world a better place through their work.”

Hollings was involved in the formative years of supporting the Experimental Program to Stimulate Competitive Research, which helped develop the research infrastructure at South Carolina's three research universities. Many science and math faculty were recruited to the university with EPSCoR funding.

Following Hurricane Hugo’s devastation of the state in 1989, Hollings helped secure funding to rebuild the university’s damaged marine field laboratory near Georgetown, the Baruch Institute for Marine Biology and Coastal Studies. The senator was a stalwart supporter of the Baruch Institute’s mission of collecting long-term ecological data on the South Carolina coast, and he provided invaluable support not only for those endeavors but also for South Carolina scientists involved in digital mapping for the National Resources Conservation Service.

In the 1990s, the senator encouraged the U.S. Department of Justice to create a dedicated center for training of federal prosecutors and other justice staff. The National Advocacy Center, administered by the Executive Office of U.S. Attorneys, was constructed on the university’s campus and now conducts an average of 250 training programs and conferences annually for thousands of federal legal employees. Countries from around the world, from Azerbaijan to Zambia, have sent representatives to the center for observation visits since 2006, further enhancing the university’s global connections.

Over several years in the early 2000s, Hollings helped to secure more than $6 million toward construction of the Arnold School of Public Health's Public Health Research Center on Assembly Street; the facility was completed in 2006. 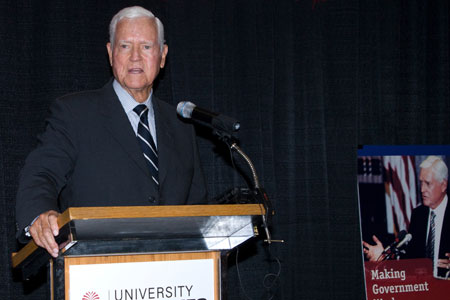 Hollings attended an event for his book Making Government Work at the university's Thomas Cooper Library.

During a summer visit to the South Carolina campus in 2003, Hollings announced to news media that he would not seek reelection in 2004. But his support for his alma mater didn’t diminish with the end of his 38-year career in the U.S. Senate. The 2010 opening of the Ernest F. Hollings Special Collections Library, an important addition to the university’s Thomas Cooper Library, was made possible, in part, by the retired senator’s efforts that netted $14 million in funding.

Along with material support for university facilities, Hollings delivered one of the single most important assets to the university’s South Carolina Political Collections — the gift of his political papers in 1989, which would eventually cover his more than half-century tenure of public service. Hollings then encouraged former S.C. governors James B. Edwards and John C. West to donate their papers to the SCPC, which led to many other similar donations over the years.

Writing in his Capital Blog, former South Carolina Political Collections director Herb Hartsook says Hollings “wanted his collection to serve as a research tool but also to become a catalyst for the creation of a center for the study of modern society.” The SCPC has become that with students, faculty and scholars from across the nation digging into a treasure trove of papers, oral histories and other artifacts of American political life.

While Hollings has departed, his legacy of public service, statesmanship and bipartisanship will continue to shine brightly with the state’s flagship university as its guardian.